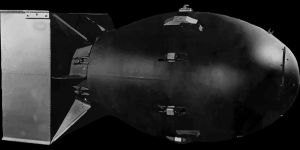 Tehran, June 20 – A Middle East country whose military and agents maintain a long-running policy of international terrorism, mining shipping in international waters, shooting down aircraft outside its airspace, and pursuing nuclear weapons technology it can mount on ballistic missiles, dismissed accusations today that it pursues anything but a future of warm, conflict-free coexistence in the region.
Officials in the Islamic Republic of Iran poo-pooed American and other Western accusations today that its attack on an American surveillance drone yesterday and on two oil tankers last week, in addition to its overall status as the leading state sponsor of terrorism in the world, indicates it does not desire peace. At a press conference in the capital, Minister of Foreign Affairs Javad Zarif called such charges baseless, and characterized them as but the latest in ongoing American aggression and colonialism.
“What we do with medium-range missiles armed with atomic warheads is our business, and no one else’s,” proclaimed Zarif. “It is not up to the imperialists and Zionists of Washington and Jeru- I mean, Tel Aviv to determine the status of our research and testing. We even accepted a treaty under Obama that curtails our nuclear development such that, if we were to abide by its terms, it would take us as much as a few more years than otherwise to acquire the capacity to wipe out every Jew in the Zionist Entity. And quite a few Arabs, but no one cares about them when it’s not Israel hurting them.”
The foreign minister of the country bankrolling and arming Hezbollah, Hamas, the Houthis, and numerous other Islamist militant groups in Lebanon, Syria, the Palestinian Territories, Yemen, Iraq, Afghanistan, and elsewhere, in addition to targeting Jewish and Israeli interests from Bulgaria to Argentina, declared its commitment to managing conflict without violence. “It is the Great Satan and Little Satan who seek war,” insisted Zarif, referring to the US and Israel, respectively.
Facilitating Bashir Assad’s ethnic cleansing and wholesale slaughter of his own people in Syria will promote peace, added Islamic Revolutionary Guard Corps commander Qassem Solemaini. “Our organization’s mission is a peaceful one,” he intoned. “Prosecuting the wars in Yemen, Syria, Afghanistan, and Palestine is a serious peaceful endeavor, and we do not appreciate, to put it mildly, when our peaceful intentions are called into question by parties that would rather not see us dominate the region and control multiple puppet regimes to serve our interests.”