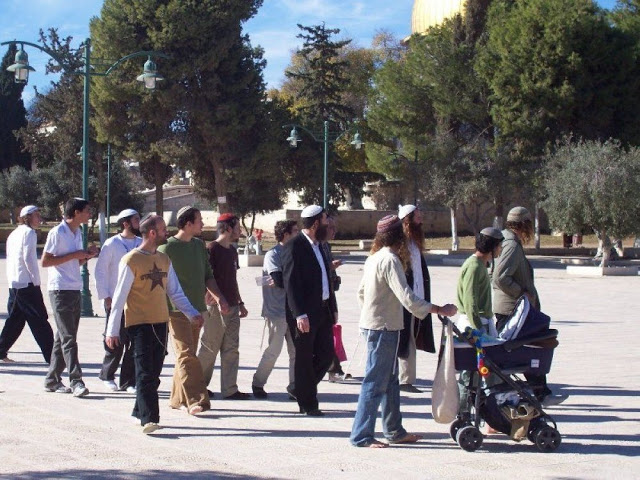 
A record number of Jews visited the Temple Mount during this year’s three-week fall holiday season, from October 3 to October 25, and overall the number of Jewish visitors to the Jerusalem site in 2016 is expected to set a record.

During the week of Sukkot alone, more than 1,600 Jews visited the Temple Mount compound for religious purposes after undergoing ritual immersion. During the entire holiday period, over 3,000 Jews visited.

The Temple Mount was relatively quiet over the holiday period, which led the police to be more flexible about allowing Jewish worshippers into the compound. For example, in contrast to last year, the police allowed larger groups to enter and permitted more than one group of worshippers to be in the compound simultaneously. On October 18 there were more than 400 religious Jews on the Mount at the same time.

Jewish visitors also reported a certain relaxation of the restrictions on prayer and religious rituals in the compound. For example, police did not interrupt anyone who was praying quietly on their own, and in a number of instances Jews were even allowed to enter the compound carrying the four species central to the observance of Sukkot.

Arab sites have picked up on this and they are very upset.

The president of the Supreme Islamic Council in Jerusalem, Sheikh Ikrima Sabri, said that the Israeli government is trying to change the facts on the ground slowly, and he criticized these “excesses,” claiming that Israeli police are emptying the compound of Muslims to give room for “settlers” to “storm” the site.

Far, far more Muslims visit the Temple Mount on any given Friday than the total number of Jews who are expected to visit even on this record-breaking year (probably 12-13 thousand.)

Meanwhile, the director of the Al-Aqsa Mosque, Sheikh Omar Kiswani, said these “intrusions represent a nightmare for us and for the mosque and patrons.”

If I am understanding this op-ed correctly, a Jordanian writer is complaining that Arabs in Jerusalem aren’t violently fighting Jews who try to assert historic rights to Judaism’s holiest spot, asking why they are leaving the battle for the Al Aqsa Mosque to Jordan alone, and warning that it will be destroyed soon if they don’t do anything about it.