Today is the first day of Shavuot. For Iraqi Jews who survived the Farhud pogrom, this festival will be associated in their minds with a horrific pogrom which occurred 76 years ago. I am re-posting an article written by Sarah Erlich for the Jewish Chronicle on the Farhud ‘s 70th anniversary. 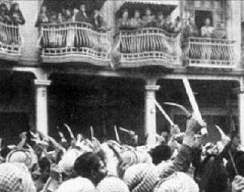 June 1 and 2 this year mark the 70th anniversary of what became known as the Farhud ( “violent dispossession” in Arabic). As significant as Kristallnacht, the pogrom sounded the death-knell for the oldest community in the diaspora and was a clear demonstration of the hatred exported to the Middle East by Hitler. The Farhud brought to an end 2,600 years of Jewish settlement, yet little has been written about it, very little is taught in Holocaust studies about it, and the British role has never been fully investigated, although many survivors still bear a lifelong distrust of Britain.

The Jews of Iraq had been living peacefully for millennia in Baghdad since the time of Babylon and by 1941 numbered around 150,000, over a third of the population. Professor Heskel Haddad, now an ophthalmologist in Manhattan, was 11-years- old at the time and recalls a happy and secure early childhood. “We had many Jewish and Arab Muslim neighbours and we were very friendly with them. I was Jewish in religion but I felt very much Iraqi. I loved Iraq and I loved the people, whether Muslim or Jew.”

One month before the Farhud a violent coup brought a rabidly pro-Nazi lawyer, Rashid Ali al-Gaylani, to power, forcing the country’s regent, a friend of the Jews, to seek British protection. Rashid Ali brought to his side the Grand Mufti of Jerusalem, a man with strong ties to the Third Reich who had fled from Palestine. Together, they indoctrinated the country with Nazi propaganda; children in Iraqi schools were taught to praise Hitler and that Jews were the internal enemy; Radio Berlin began regular broadcasts in Arabic. Their aim was to rid Iraq of the British presence and turn the country’s oil reserves over to the Germans.

Next, Rashid Ali ordered Iraq’s military to destroy the British RAF base in Habbaniya, west of Baghdad –– a non-operational flight training centre equipped with antique planes, manned by cadets. Despite the odds, the Iraqi campaign failed drastically. With his forces humiliatingly defeated and British ground troops advancing on the city, on May 30 Rashid Ali fled the country leaving the capital in a vacuum.

The regent’s return was announced two days later, to the relief of the Jews celebrating Shavuot. Their joy turned to horror however when the Muslims mistook their celebrations to be the result of the country’s downfall at the hands of the British. A huge mob gathered, armed with knives, swords and guns, chanting “Ketaal al yehud” (“Slaughter the Jews”). Eleven-year-old Haddad was with his family having a festive meal. “Suddenly we heard screams, ‘Allah Allah’, and shots were fired,” he recalls. “We went out to the roof to see what was happening – we saw fires, we saw people on the roofs screaming, begging God to help them. There was a guy across the street from our house screaming: ‘Help me! Give me water!’ and my father didn’t let me give him water because he was afraid that I might be killed by the gangs. The voice of this man ended an hour or two later when I guess he died.”

Salim Fattal was also 11, living with his family in the Jewish quarter of Tatran. Like everyone, they were completely unprepared for the violence that hit the city. “We were hiding with all the children and women in the cellar listening to the whistling of bullets around our house,” he says. “We had no weapons and there were four men trying to defend 21 women and children with just some sticks and knives. We knew we couldn’t defend the house against these armed invaders. It was terrifying.”

Taken by surprise and with no protection, Jews either defended themselves with whatever they could find or else bribed Iraqi policemen to protect them. Fattal’s mother found one near their alley and approached him with a parcel of money. The policeman agreed to stay with them until midnight.

The violence worsened during the night and the mob was soon in its tens of thousands, targeting every Jewish home in the city. The task was easy as a red hamsa – a traditional hand symbol – had been painted on the exteriors.

“We could hear screams from our neighbours which was a horrifying sound,” continues Fattal, even now crying at the memory. “All of them all started to shout and scream and it would last for two minutes or so, and then the sound died. Then the same sound would renew from other directions. These voices have never left me. They were so strong, so close and so clear.”

By the second day, Fattal could see from his balcony that the mob was attacking his neighbour’s house. “We could see them right under our noses and if they had decided to attack us then, no one could have stopped them as it was very easy for the rioters to move from roof to roof. So we called our armed policeman from outside and begged him to fire a few bullets in the air to scare them away. Our policeman insisted on more payment and my Uncle Naim argued that we had already paid him generously. But our policeman kept repeating: ‘How much will you pay?’ while our situation was getting more and more threatening by the minute. Finally they agreed upon half a dinar per bullet. Had he refused, we would have taken his gun. The policeman fired two shots and paused and then two more shots, until he saw the rioters move away.”

There were also accounts of Muslims acting heroically to save their Jewish neighbours. Steve Acre was nine at the time, living with his widowed mother and eight siblings in their landlord’s house. “Our landlord was a devout Muslim called Hajji who wore a green turban, and when the mob came, he sat in front of them and told them that there were orphans in his house and that if they wanted to kill us, they would have to kill him first. So they moved on across the street.”
Acre, who has been living in Montreal for over 50 years, sees Iraqi Nazism as the direct cause of the Farhud, but also blames the British for not having stopped it when it was within their power. (…)

Tony Rocca, who researched and co-wrote Memories of Eden with a survivor of the Farhud, Violette Shamash, agrees. “To Britain’s shame, the army was stood down while hundreds of Jews were killed in rioting that raged over two days with damage estimated at £13 million by today’s values. Archive material points to one man who deliberately kept the troops out. Sir Kinahan Cornwallis, Britain’s ambassador in Baghdad, for reasons of his own, held our forces at bay in direct contradiction to express orders from Prime Minister Winston Churchill that they should take the city and secure its safety.”

The violence was stopped only when it appeared the rioters were getting carried away and entering Muslim areas. A curfew was called, and Iraqi troops began shooting looters. But the death toll of around 800 and thousands more injured is a memory Acre can never forget. “When you hear yelling and screaming of women and children, it stays with you forever.”

More about the Farhud