In The Times of 26 January, an interview with Channel 4’s Countdown‘s numbers whizz Rachel Riley, who’s Jewish, and who has been bombarded with “vile abuse” and even threats of violence since speaking out against antisemitism in Corbynista circles.


‘Until recently Rachel Riley had never felt particularly Jewish. “When I was a kid my mum would give us pepperoni pizza,” she said. “We’d light the menorah candles but we didn’t go to synagogue and I’ve never done Friday night.”

But now the Countdown presenter is at the forefront of the campaign against antisemitism, having suffered “hideous abuse” and physical threats from Labour activists for criticising Jeremy Corbyn’s failure to tackle it. She is even being given extra security on the programme.

Her sense of Jewish identity is stronger than ever. On Tuesday she was in parliament speaking alongside MPs at a Holocaust Educational Trust reception. “You don’t need any aspect of religion to feel a part of that group,” she said.’ 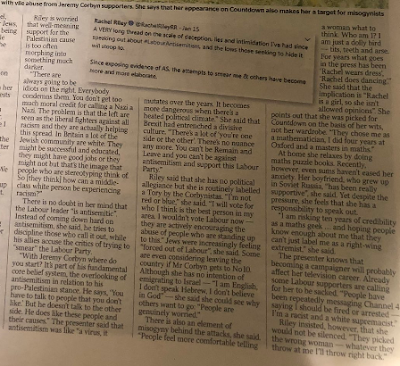