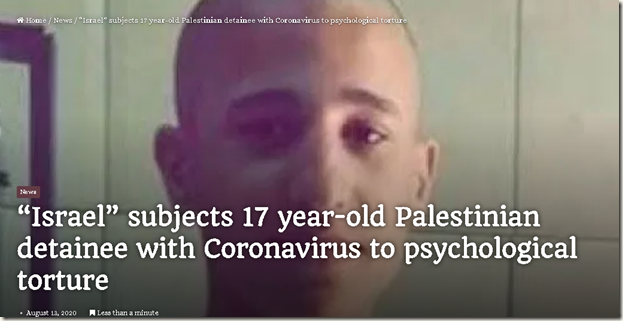 The haters just keep throwing stuff at the wall and hoping something sticks.

From The Inside Palestine and many other Palestinian news sites:

Palestinian detainee Mahmoud al-Ghalidh, 17, who has tested positive for coronavirus, is subjected to psychological torture in Israeli jails, al-Dameer Association for Human Rights said on Tuesday.

Al-Dammeer called for the immediate release of al-Ghalidh who is staying at an isolated room in Raymond Prison where he is denied basic necessities, such as clothing.

Israeli occupation forces arrested al-Ghalidh from his home in Jalazone refugee camp in Ramallah on 23 July, and on 3 August, the Israel Prison Service announced that he has coronavirus.

At the exact same time:

The head of the Prisoners and Editor s’ Affairs Authority, Major General Qadri, said that the Government of Israel is practicing the policy of deliberate medical killing against prisoners, which is a crime that amounts to serious violations against sick detainees.

So if Israel would take al-Ghalidh out of quarantine, they would be deliberately killing other prisoners. Keeping him in quarantine is psychological torture.

This“child” was 18 when he was arrested. But “incarcerated children” get more headlines so a year was taken off of his age since he was found to have been infected with the coronavirus.