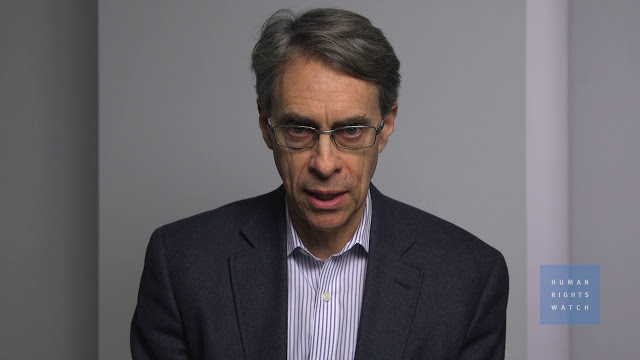 Ken Roth, the head of Human Rights Watch, tweets more that President Trump does. Yet I cannot find any tweets where he denounces antisemitism that cannot be blamed on white nationalists.

Essentially, he denies that any other sort of antisemitism exists.

The one tweet that shows this more than any other was written in 2018:

Of 1,453 anti-Semitic crimes in Germany in 2017, nine out of ten were committed by members of far-right or neo-Nazi groups. But let’s blame the Muslims. https://t.co/T3W3DLMJ1p

The New York Times article he refers to is about a rally against antisemitism that was prompted by an attack by a Syrian on someone (who wasn’t Jewish!) wearing a kippah.

Yes, a human rights advocate is literally making fun of anyone concerned about Muslim attacks on Jews.

Certainly Roth knows that the vast majority of violent attacks against Jews in Europe have been done by Muslims. He not only fails to acknowledge them, but he smugly denounces anyone who mentions it!

What about this German study that supposedly says that 90% of attacks are from the far-Right? It turns out that the study was worthless.

The German government uses outdated and ambiguous definitions of the motivation behind antisemitic attacks that by their nature do not include specifically Muslim antisemitism as a category, only the vague “foreign ideology” or “religious ideology” as well as right and left wing. So, for example, when 20 Muslims chanted “Sieg Heil” at an Al Quds demonstration in 2014, the government absurdly classified that as “right wing” antisemitism. Four Palestinians who burned down a synagogue were not charged with an antisemitic crime.

In reality, German Jews have reported that 41% of the antisemitism they have experienced comes from Muslim extremists, and only 20% from the far-Right – not much more than the 16% from the far-Left.

The German government itself has written a 40-page report specifically on Muslim antisemitism.

Ken Roth never mentioned any of this.

If the German government and German Jews (as well as other studies) refute the claim that nearly all antisemitism in Germany comes from the far-Right, then why does a supposedly human rights defender actively deny the evidence and cherry picks only one specific type of antisemitism to ever denounce?

There is nothing wrong with combating the very real danger of right wing antisemitism. There is something very wrong about denying that any other types exist or are worth talking about. If you deny the very existence of a type of antisemitism that conflicts with your political beliefs, then you are a denier and enabler of antisemitism.

What kind of a human rights leader makes fun of the very real fears of people of Islamic extremist antisemitism?

Ken Roth, by sarcastically denying that any non-Right version of antisemitism even exists, shows that he is unqualified to call himself a human rights advocate at all.