Not London, England, where since 29 September antisemitic incitement has been at work on stage.  For there, as widely known by now,  the Young Vic theatre company has been performing the squalid propaganda piece My Name is Rachel Corrie. 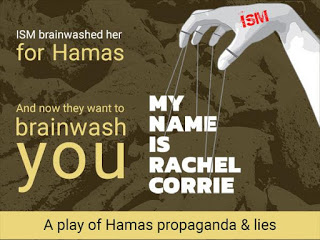 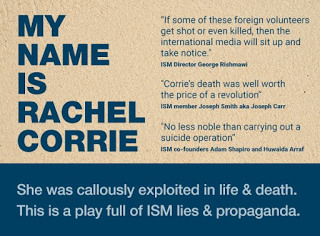 The singer referred to is the 2013 Arab Idol winner Mohammed Assaf, from Gaza, who’s presently in Canada on a five-city concert tour and will be on stage in London this coming Sunday night. 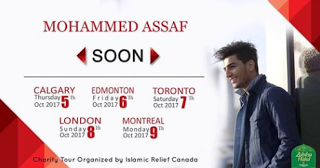 Here’s David Menzies of Ezra Levant’s TheRebel.media reviewing some of Mr Assaf’s off-stage activities, and requesting signatures for a petition to be presented at the theatre on Sunday.

Writes David Menzies in introducing his petition (that’s in bold type below):

For example, his song, “Ya Yumma”, is one long propaganda video promoting violence against Israel. While showing videos of riots against Jews, Assaf calls on Muslims to rise up and “fight the occupiers”. He calls terrorists “martyrs” and tells young Palestinians to “fight back” to conquer Jerusalem.

And if you think that’s bad, on his Facebook page — that has 10 million followers — Assaf posts pictures of terrorists who attack Jews, and calls them “holy martyrs”. No wonder when Assaf first arrived in Canada this week, he was greeted by Nazih Khatatba — a Holocaust denier.

So what can we do?

I don’t believe in censorship, even for bigots like Assaf.

But I can think of two things we need to do right now.

1. On Sunday night, Assaf is performing at Centennial Hall in London, Ontario. That’s owned by the city.

I want to deliver a massive petition to Centennial Hall’s management on Sunday night, with thousands of names of Canadians who object to a pro-terrorist singer swanning through Canada. I want London’s city council to know the kind of company they’re keeping.

2. I want to show London the truth about Assaf — including any concert-goers who might not know how odious he is.

I’ve rented a billboard truck. It’s like a jumbotron from a sports venue, but it’s on the back of a truck!

And we can program it with words, pictures, anything. I want to load it up with facts about Assaf, and drive it around the city before the concert — showing citizens the truth. And confronting concert-goers with those facts, too.

The cost of the petition is free, obviously — please sign it by clicking below. I’ll deliver it on Sunday night.

That’s my plan — it respects freedom of expression. But it shames Centennial Hall and its owners, the City of London. And it forces Assaf’s concert-goers to come face to face with their star’s hate.

If you agree with my plan, please sign the petition below.

We object to Mohammed Assaf, whose music promotes terrorism, performing in Canada. His glamorization of hatred and violence is not welcome here.’