The Israel Policy Forum put together a webpage quoting all the senators –39 of them, all Democrats, all who say they are pro-Israel – who are against what they call “annexation.” 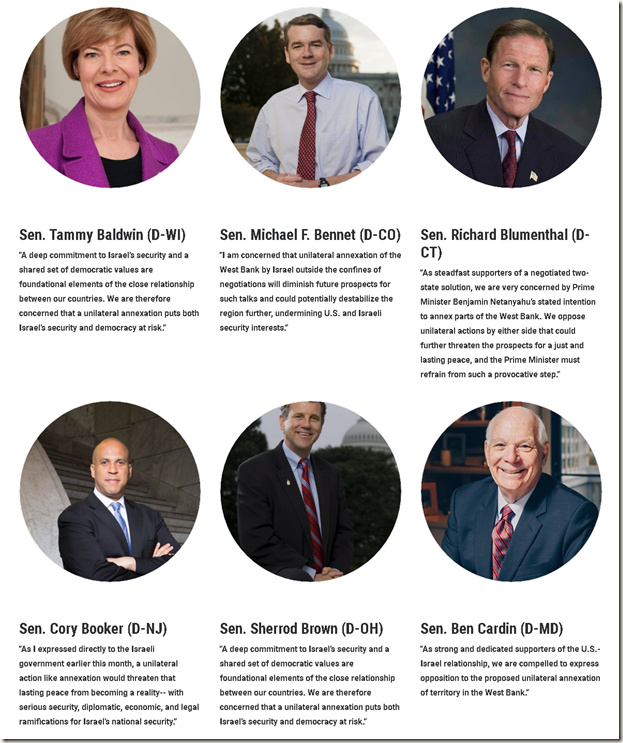 Nearly all the senators base their argument on what is best for Israel’s security. But many of them – and the Israel Policy Forum itself – also argue that one major reason against extending Israeli law to sections of Judea and Samaria will “create unprecedented stress on the U.S.-Israel relationship.”

The only reason for that stress is because nearly every pro-Israel Democrat is more interested in a two state solution based on the 1949 armistice lines than in peace. The concept of a Palestinian state has morphed from a good idea at the time of Oslo into a religion that has no rational basis. The circumstances have changed a great deal since 1993 but the “pro-peace” position has not.

For example, here is one of the arguments used by the Israel Policy Forum against the Trump plan:

The Trump plan incorporates the important concept of land swaps. However, the land swaps are imposed rather than mutually agreed upon, and are not equitable in quantity or quality.

Implied in this analysis is that any solution must be “mutually agreed upon.” This seems like a truism, but the past twenty years shows that this basic concept is antithetical to peace, not a prerequisite.

Over the past two decades, the Palestinian Authority has rejected every plan that would have given them a state. They didn’t do this with any realistic counterproposals – they did this by employing veto power over any solution offered.  Because every agreement, by definition, must be “mutually agreed upon,” the PA has the power to never agree to anything beyond their maximal demands. The negotiations haven’t been a give and take – they’ve been offers and refusals.

This same Palestinian Authority has never prepared their people for a future where they live in a state side by side with Israel. Every single map they publish of Palestine – in schools, in newspapers, on TV, in their logos – includes all of Israel.

This same Palestinian Authority still makes terrorists, not peacemakers, into heroes. It lionizes murderers. It prioritizing paying terrorists and their families.

This same Palestinian Authority has refused to hold elections for close to 15 years now.

This same Palestinian Authority has been using the people of Gaza as pawns, cutting aid to them while creating, with Hamas, an environment where all criticisms about Gaza’s awful situation must be blamed on Israel, not on their infighting or on Hamas terror.

This same Palestinian Authority has no mandate – Hamas, a terror group, won the last elections.

This same Palestinian Authority keeps insisting that there can be no peace without “return,” a transparent ploy to destroy the Jewish state.

This same Palestinian Authority has unilaterally decided that they will not talk to Israel.  They  criminalize anyone who wants to work with Israelis on a grassroots level. And they do not allow a free marketplace of ideas in their media where these topics can be openly discussed. In fact, criticizing the PA can result in being arrested.

For all these reasons, the very basis of the idea that any solution must be mutually agreed upon is shown to be false. Reality on the ground has fundamentally changed since the 1990s. A peace agreement with the PA is impossible.

I have no doubt that most of these Democrats, and liberal think tanks like the IPF, support Israel’s right to exist in peace and security.  But they blind themselves by sticking with a peace paradigm that has been proven to be not only impossible but based on a false idea of what the Palestinian Authority is, and what it can do.

The PA strategy is to keep using their veto power until Europe (or the US Democrats) pressure Israel to give them what they want without any compromises. And, unfortunately, the US Democrats are playing their part.

If peace is the goal, and the Palestinian Authority has shown that is cannot be a partner for peace, then there are only two choices: the status quo, which works in favor of the Palestinian leaders – or Israel acting in its own interests unilaterally.

That means, at a minimum, Israel setting its own borders rather than wait for an agreement that will never happen. That means “annexation” of some disputed land.

If these pro-Israel Democrats really wanted peace, they would be using their energy to warn the Palestinian Authority of the consequences of their unilateral actions over the past twenty years, rather than warn Israel of the consequences of its potential actions. Israel is quite aware of the risks, thank you.  If members of Congress want peace, don’t pressure the only side that has shown it wants peace.

It isn’t Israel that is putting the US-Israel relationship at risk. It is the people who make that a self-fulfilling prophecy.

Israel has waited for decades for a partner; when there is no partner one must act alone in one’s own interests. Real friends of Israel would know this.