According to this fascinating Media Line report in The Jerusalem Post,  the rising authoritarianism of Turkey’s ruling AKP party, led by Recep Tayyip Erdogan, has left the descendants of the followers of the medieval ‘Messiah’ Shabetai Zvi, the Donme, increasingly uncomfortable. Although they have been Muslim for centuries, some are, like many Turkish Jews,   applying for Spanish and Portuguese passports. (With thanks: Lily) 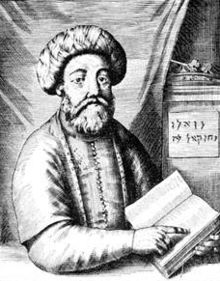 Shabbetai Zvi: proclaimed himself Messiah, then chose conversion to Islam

Following the First World War and dissolution of the Ottoman Empire, the Salonika Dönme, officially considered Muslims, were forced to move to Istanbul in a Christian-Muslim population exchange between Greece and the newly established Turkish republic. They had to leave most of their wealth behind in Salonika and didn’t meld into the young Turkish republic, where they were viewed with suspicion and soon tarnished with scurrilous conspiracy theories. Most of them assimilated into republican society, losing their unique culture, while the few that retained their religion hid their identity from the public. “In this climate, the Dönme were extremely secretive,” Kösemen says. “Years passed, [and] these people either died, forgot their [religious practices], or hid them.”

After much research that eventually became a book, Kösemen realized that on his father’s side, he himself was one of the thousands of Turks who unknowingly have Dönme ancestry. There are still perhaps 2,000 Dönme remaining in Turkey who have maintained their identity and beliefs, though many of their religious practices have evolved with time. Due to rampant discrimination and religious obligations of secrecy, most extant Dönme conceal their identities and don’t speak to outsiders about their communities. However, The Media Line was able to meet two of their members, who spoke on condition of anonymity. Cem is from the more secularist and Judaic Kapancı sect, and Osman is from the more spiritual Karakaş sect. Both are in their forties, and neither speak for the Dönme in any official capacity.

Cem and Osman agreed that, although the Dönme have been victims of discrimination since the early days of the republic, the rise of the currently ruling and ardently Sunni Justice and Development Party (AKP) has made them feel more uncomfortable than ever before.

“With the 2002 election of the AK Party, everything changed,” Osman says. “There’s a new kind of disturbance with this government.”

Cem supported the AKP’s liberal reforms in its early years, but stopped around 2009 due to its authoritarianism and other troubling practices. He says the AKP has tried to socially engineer society in favor of pious Sunni Muslims, and this new model excludes religious minorities and secularists.>

“You have to be one of them in order to be a good citizen,” Cem says. He and other Dönme are trying to gain Spanish or Portuguese citizenship, since their ancestors are Sephardic Jews who fled religious persecution in those countries in the late fifteenth century.

“This is like Plan B [so that] if things go sideways I have another place to go to,” Cem says.

After their Messiah’s death, the Dönme eventually split into three sects, each with quite different beliefs. “The differences between the sects were so visible, so strong, that by the second half of the nineteenth century, there were almost no social connections between them,” says history professor Cengiz Şişman, one of the few Dönme experts in the world and author of a book about them, The Burden of Silence.

The Dönme developed a unique Kabbalist culture that was partly influenced by Sufism, a form of Islamic mysticism. “They borrow some ideas from Sufism, but only so long as it fits into the Jewish mystical framework,” Şişman says.

Cem considers Sabbatai Zevi a kind of reformer, comparing him to Martin Luther and saying that he made Judaism more inclusive to women.

“He kind of spiritualized Judaism,” he says.

Osman says that, at least for the Karakaş, the Sufi-influenced practices aren’t just to blend in with Muslims, but are genuine.

“The important thing about these Dönme Muslim rituals is that they aren’t some sort of fake display. They’re all honest and heartfelt.”

However, Cem says his sect, the Kapancıs, hasn’t been influenced by Islam at all, and is now completely secular.

“We never really considered ourselves true Muslims at any point in history,” he says. “To me, it’s an ethno-cultural identity, not a religious identity.”

The Ottoman Dönme would purposefully break traditional Jewish and Islamic rules, eating non-kosher foods, working on the Sabbath, and breaking the Ramadan fast five minutes early. They developed their own liturgy and beliefs, reading from tiny, easily concealed prayer books, and following a unique religious calendar based upon Jewish and Sabbatean holidays and respecting Muslim ones. The Dönme holidays are more festive than Jewish ones, with no mourning. For instance, even on Tisha B’Av, (the ninth day of the Hebrew month of Av), a sad commemoration of the destruction of Judaism’s two sacred temples in Jerusalem during which observant Jews fast for 24-hours, is a time of rejoicing for the Dönme since it’s Sabbatai Zevi’s birthday.

“We only have joyous holidays because there’s no reason for having observances of grief after the coming of the Messiah,” Osman explains.

“We’re not so much of a fast people; we’re more of a feast people,” Cem adds.