I saw an article in Al Watan Voice that claimed that in 1948, as American Jews were fundraising to save the nascent Jewish state being attacked by combined Arab armies, they shouted the slogan “Pay a dollar to kill an Arab” through loudspeakers.

Of course there is no record of this happening.

There is an apparently popular book in the Arab world with that exact name, though (it can be downloaded here.) 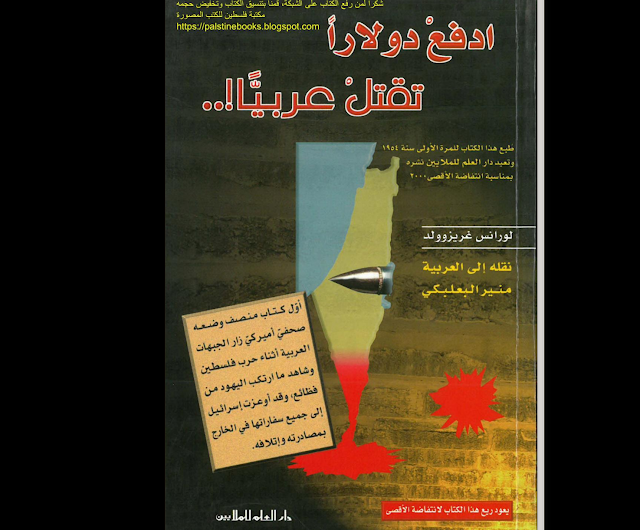 The book is so popular in the Arab world that a tweet from Lebanon Archives looking for the provenance of the book starts off saying “I think most of you have read this book.”

It is a translation of a book by Lawrence Griswold from 1952 called “This Sword for Allah!”, a “History of Palestine inspired by the author’s career as a correspondent during the Palestine War at the end of the 1940s.”

Griswold was an inveterate hater of Israel and an antisemite. He is mentioned in the American Jewish Yearbook of 1957: “Lawrence Griswold published a newsletter, Background for Tomorrow, which in its October 31, 1955, issue, referred to “the selfish aggressiveness of privileged Jews, both in this country and abroad. . . . Thoughtful Americans should consider well, if they wish to avoid the demoralization of society which follows pogroms, whether they should employ enlightened self-interest now and write off the ugliness of Israel.”

Apparently, Griswold made up the libel of Jews saying “Pay a dollar to kill an Arab” and Arab antisemites loved his work so much they translated his book where he apparently made that claim. Now it is considered common knowledge in the Arab world.