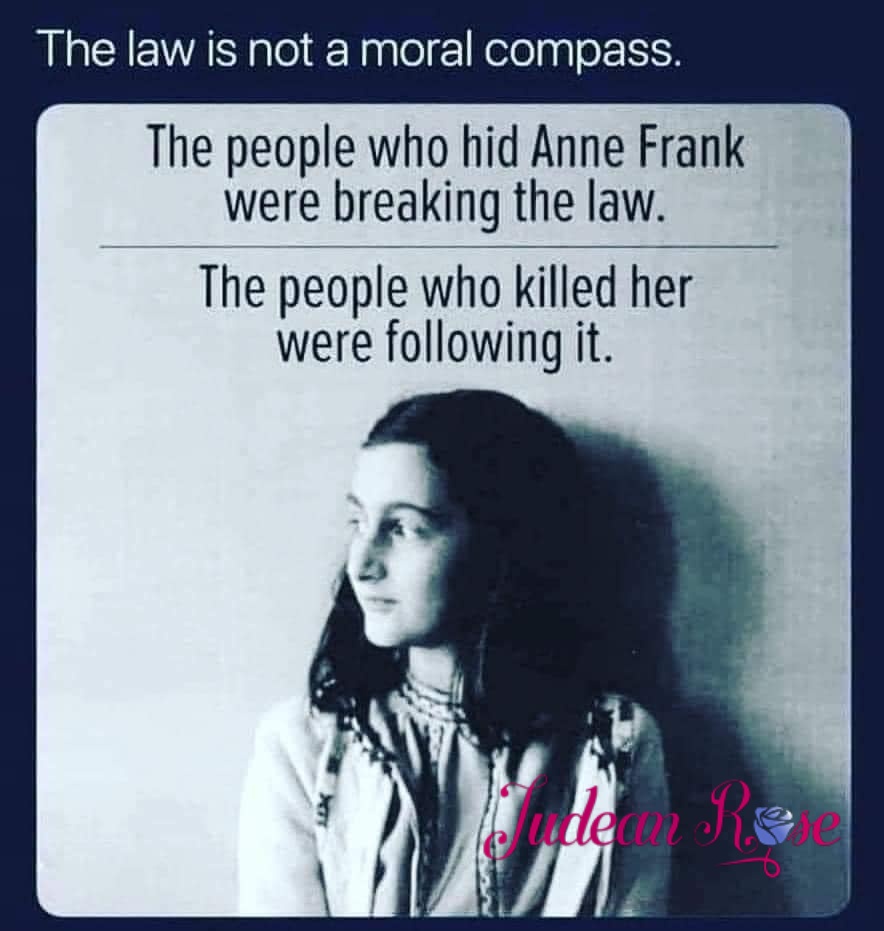 The Holocaust was an outsized event: comparable to no other, unparalleled in history. Perhaps that is why, more than any other catastrophe, the Holocaust gets exploited. The Holocaust is used to compare and draw parallels to whatever particular issue bugging people at any moment in time. And in one sense, exploiting the Holocaust in this manner proves the magnitude of this event: the Holocaust is the worst thing people can think of, so it is where they will always turn for inspiration and debate points.
Using the Holocaust for comparison’s sake, on the other hand, cannot help but weaken the power of this singular event in our minds. If something is as bad as the Holocaust, then the Holocaust is not the worst thing that ever was. It was just as bad as something else: whatever gets your goat at a given point in time.
A current example of how this works relates to the politicization of lockdown measures in the face of the global pandemic. Some of us see coronavirus measures as the government doing the best it can in an unprecedented situation. If lockdown measures and regulations seem contradictory at times, or even silly, we trust that the intent of these measures is to halt the spread of contagion and keep people safe.
Other people may, however, find lockdown measures arbitrary, unnecessary, counterproductive, dangerous, or a form of government oppression. They may even see some nefarious intent on the part of the government or be suffering from “Trump Derangement Syndrome,” in which they feel compelled to trash-talk every action taken by the president, good or bad. If you find yourself anywhere in this paragraph, you no doubt feel compelled to make your case, loudly and at length, to everyone in hearing/viewing distance.
And what better way to show the evil intent and oppressive nature of lockdown measures than to compare them to the Holocaust? And so it was that I butted heads with a libertarian on a Facebook group called “Corona Virus Insanity Memes.” I was there not to interact with the members of this group but to find memes to cheer up my friends during lockdown. I do this most days, sifting through lots of duds to find the best.
Sometimes the memes offend me, or fail to draw a chuckle, but rather than say anything, I simply skip past to the next one. Different strokes for different folks. No point arguing these things.
But the other day I bumped into a meme that stopped me cold. The meme, depicting Anne Frank, gazing into the distance, was captioned, “The law is not a moral compass. The people who hid Anne Frank were breaking the law. The people who killed her were following it.” 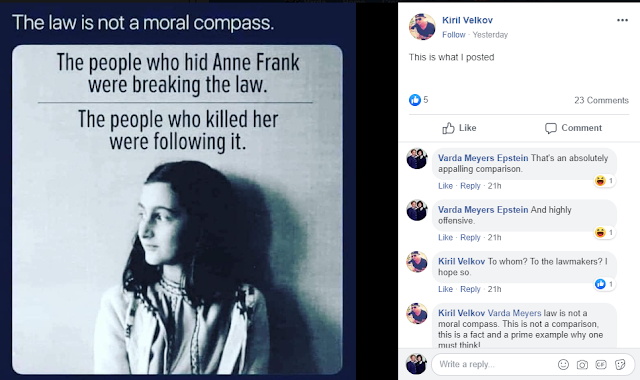 The thrust of this meme is that laws should not be equated with morality. Sometimes we have to break laws in order to do the right thing, and sometimes obeying the law is evil. In other words: just because something is lawful, doesn’t make it right.
Like I said, normally I skip past something that offends me. I don’t want to debate random people on the internet. To what purpose? But this meme pushed my buttons. I was incredulous. Is this guy really saying that being asked to wear a mask and stay indoors to avoid contagion is the same thing as being forced to hide in an attic to escape being murdered because one is a Jew?
So I told the guy: the comparison is appalling and offensive. The two situations are not at all analogous and the Holocaust should be off-limits as either a comparison point or comedy material. That such exploitation trivializes the Holocaust.
But Kiril was never going to hear me. He was hell bent on making me see that I was missing his point and on illustrating his supposed oppression. I knew it, and yet persisted in trying to get him see what he could not see. The enormity of the Holocaust. The numbers. The intent of lockdown measures versus Hitler’s Final Solution. The fact that law didn’t enter into what happened to Anne Frank. That Germany invaded Holland, where Anne Frank’s family went into hiding. That no one elected Hitler to rule over the Dutch or move the Franks to Bergen-Belsen, where Anne died of typhus at age 15.
I talked about the magnitude of the Holocaust, the over 6 million people gassed to death and burnt in crematoria and the difference between being hunted and targeted for being Jewish and being asked to stay home to contain contagion. None of this left any sort of impression on Kiril, who only doubled down, suggesting it was a good thing to use the Holocaust to shock the people and give them a rude awakening about government overreach, to learn from history whatever we can.
But this is a distortion of history. The two situations are not analogous. And to compare them weakens the impact of what the Holocaust was, and how it impacts on our lives still today and for generations to come.
It is true that in a democratic society, people vote for their leaders but don’t always like the results. But there are second chances. They can rectify the situation by voting differently in future or by resorting to the courts. Anne Frank, on the other hand, is dead, and stays dead. There are no more choices for Anne Frank or the other almost 7 million Jews murdered on behalf of Hitler’s Final Solution.
If we can compare anything to the Holocaust—anything at all—then what, exactly, is special about the Holocaust? How is it different from any other terrible situation, imagined or real?
To my mind, the main reason not to compare anything to the Holocaust is to preserve in our minds the uniqueness of this catastrophic event in all of history. The Holocaust, this concentrated effort at eliminating the Jewish people once and for all, stands at the very pinnacle of evil which, until now, and God willing forever, simply has no equal.