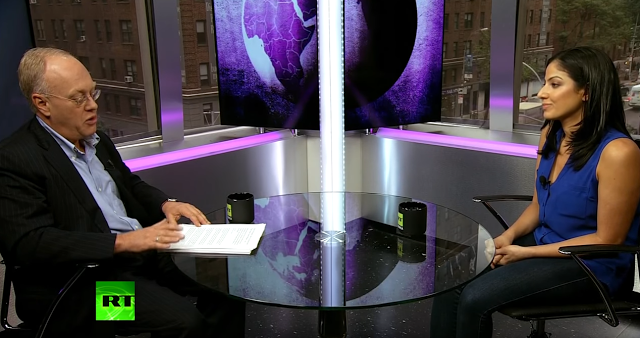 RT (formerly Russia Today) has a half-hour program where former New York Times reporter Chris Hedges, at home in his new Russian media outlet, interviews Rania Khalek about how Israel is supposedly testing out cool weapons on Palestinians and then selling them, as well as how Israel trains US police to use violent methods against minorities.

The interview is a farce masquerading as reporting, with Hedges asking Khalek things that she has no idea about and she pretends to spout some answers.

The only specific weapon Khalek mentions that Israel “tested” in Gaza and then marketed was a bunker buster bomb. Of course, she didn’t mention that Hamas builds tunnels 30 meters below the ground to Israel in order to stage terror attacks, and only a bunker buster can hit something like that.

Similarly, she accuses Israel of killing Palestinians for the mere crime of carrying a knife, without mentioning what exactly they were doing with those knives.

What is most interesting is that both Hedges and Khalek are known plagiarizers.

Hedges has a long history of plagiarism, as this New Republic article lays out in excruciating detail. He stolen lines and paragraphs from several other writers, including Ernest Hemingway.

Khalek was once booted from Alternet for her own plagiarism, lifting essentially  an entire article from Cracked magazine.

Hedges and Khalek – what a perfect combination of frauds. Not only frauds, but frauds who pretend that the are motivated by ethics in their libelous reporting when they are both proven to be thieves of others’ intellectual property.

RT is the perfect venue for the false pieties of these “progressive” frauds.