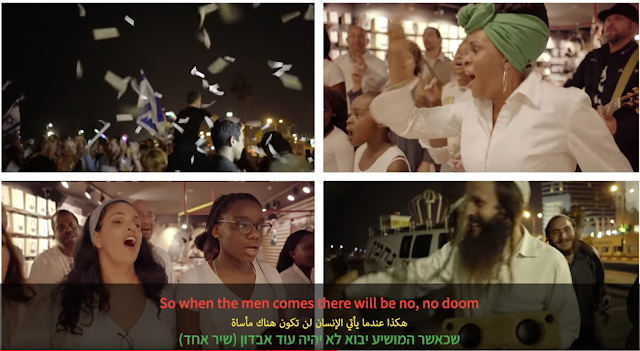 A heartwarming story came out last week as a video was produced ahead of a Bob Marley festival in Israel.

This year, the initiators of the festival, Shmulik Bar-Dan and Bella Malkin, decided to shoot a clip for the Marley song One Love, an unusual clip to be shared by adults and children from all over the Middle East.

The song was performed by members of the writer-group “Kach Rasta”, who are also responsible for all the arrangements. “We filmed forty children from a school in Baka al-Garbiyeh, photographed in a children’s home on Kibbutz Magal, in a nursery in Herzliya, we filmed members of African-Israeli gospel from Eritrea and Sudan, and a few Breslov Chassidim,” says Malkin.

But then they saw a good news story here about Gaza residents who sent peace messages to Israel with the aid of pigeons from the Gaza Strip, and the article about Lisa Miara, the Israeli who established a rescue center in Iraq for children rescued from ISIS and refugee children from Syria.

When Malkin turned to them to offer them to participate in the clip, they responded with great enthusiasm.. In Gaza, a class of elementary school girls was photographed in the clip after learning about the song and its messages. “They knew that they were filming an Israeli clip that would be distributed on YouTube to the whole world, and they were very enthusiastic about this idea and the possibility of pulling out a message of peace from Gaza,” Malkin says.

The addition of the children of northern Iraq to the clip moved her even more. “To think that children who yesterday were threatened by ISIS sing today ‘One Love’ is perhaps the most powerful thing I have experienced working with Marley’s songs,” Malkin says. “Lisa told me that these are the first words they learned in English, and when they filmed the clip, Word and word, and wanted to convey the message that we are all human beings, and we all run to sing and to love.”

This video showing people of all ages, colors and nationalities singling about peace and love violates both the BDS rules and Palestinian Authority law.

The BDS Movemenr, which pretends to support peace, is against anyone cooperating with Israel in any cultural projects, so therefore the Syrians, Iraqis and Gaza children who sang here are, to their minds, collaborators with the Zionist entity and not interested in peace.

The Palestinian Authority is against any “normalization” with Israel, and the only Israelis they agree to deal with are the ones who support their aims to destroy Israel. A non-political project with Israelis who want peace is forbidden for Palestinians. In a way, it is good that the children on this video are from Gaza where they cannot be punished by the PA, although how Hamas reacts is an open question.

Throughout the Arab world there are many committees and groups against “normalization” with Israel as well, and possibly this video violates Iraqi and Syrian laws.

The one nation that yearns for peace is the one that is painted as hating peace, and the people who pretend that they only want peace are the ones who are upset at a peace video.

To be fair, Ma’an’s article about this video is not judgmental. But as the video gains popularity, expect to see a major backlash in the Palestinian and other Arabic media against the idea of any cooperation with Israelis, even for something as non-offensive as this.