Americans for Peace Now is happy to welcome one of the most egregious liars on the planet to a conference call:

An Israeli government decision to annex large parts of the West Bank would threaten the future of Israeli-Palestinian relations and the future of the Authority (PA). The PA has recently threatened to renounce all agreements with Israel if the Israeli government proceeds with its plan to apply sovereignty to parts of the West Bank. Some analysts predict that such an Israeli measure might cause the collapse of the Palestinian Authority. Some predict another eruption of violent protests in the West Bank.

What would annexation mean for Palestinians? How would their leadership react to such an Israeli step? Does Mahmoud Abbas’ PLO have a plan for reacting to annexation on the world stage? Would the Palestinian Authority’s security cooperation with Israel collapse? Would the PA collapse?

Addressing these and other questions would be veteran Palestinian diplomat Dr. Saeb Erekat, the Secretary General of the PLO’s Executive Committee, who for many years served as the Palestinian chief negotiator with Israel.

Erekat is not there to offer predictions or insights into the PLO reactions to any Israeli moves. He is there to threaten the world with lies about how the PLO will respond.

We know this because we’ve seen this play before. It wasn’t that long ago that Erekat went before Western media to threaten the PLO’s response to any possible move of the US Embassy to Jerusalem.

In 2016, Erekat said that the embassy move would be “sending this region to more chaos, lawlessness and extremism.” When the media ignored that threat, he added that:

The PLO will  immediately revoke its recognition of Israel

The prospect of a two-state solution will be over

Any hope of Israeli-Palestinian peace in the future will vanish

Erekat would immediately resign as the chief Palestinian negotiator 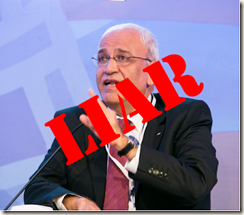 These weren’t predictions nor promises.  These are threats.

Guaranteed, Erekat will repeat these threats now, even though not one of them came true last time as a result of the embassy move. (The two state solution was killed by the PLO many years ago.)

This time, the PLO is using the same tactics, and is also enrolling Jordan and the EU to pressure the US and Israel with more threats. Americans for Peace Now doesn’t want Erekat to tell them the truth either – they want him to give them ammunition to go to members of Congress with confident predictions backed up by a high-ranking liar.