Peace Now issued a report, and AP described it this way:

Israeli settlement activity in the West Bank surged ahead in 2019, a watchdog group said in a report Tuesday, maintaining a rapid pace that has drawn strength from the friendly policies of the Trump administration.

This is accurate and quite misleading. Peace Now is cherry picking the statistics to make them sound like there is a dramatic increase.

In this report, they are saying that the average number of completed structures has gone up in the past 3 years than in the 8 year previous, comparing the entire Obama term to the entire Trump term.

Here is what the last ten years looks like – hardly a pattern. 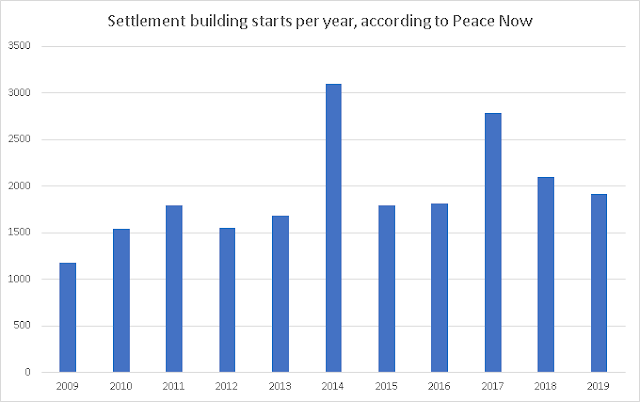 Peace Now has another chart of the same information over a longer time period – but the numbers are different, I’m not sure why.

Every year Peace Now tries another way to make it sound like there is more construction than the year before, and half the time they have to play statistics games to make it appear that way. As you can see, there is very little upward slope.

Their deceptions don’t stop there:

Nearly 63% (1,200 housing units) of the new construction was in settlements east of the proposed Geneva Initiative border, i.e. settlements likely to be evacuated in a two-state agreement.

Who says that the failed 2003 Geneva Initiative reflects anything close to what a two state solution could look like? Most people would say that the security barrier was the more natural border, if Palestinians ever decide they want peace. My guess is that most of the new construction is within the security barrier – but Peace Now does not want that to be the border, so they are trying to prop up Geneva.

Here is my attempt to show an overlay of Geneva (blue areas east of the 1967 lines) and the security barrier (thin and thick red lines:) 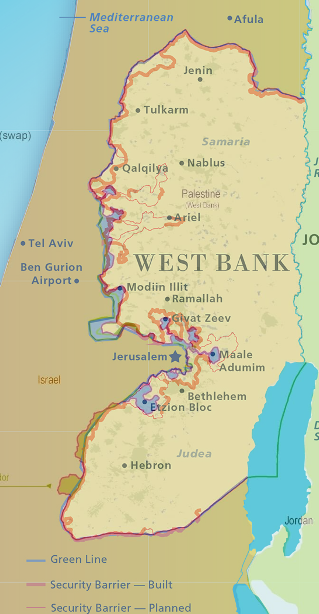 Peace Now is careful not to lie, but they are equally careful to deceive.