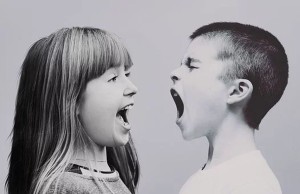 Giv’at Shmuel, March 19 – Heads of a family who have so far succeeded in preventing their offspring from killing one another amid restrictions that keep everyone housebound in the face of a deadly pandemic believe that after handling that fraught situation, they feel prepared to broker a lasting settlement between Israel and the Palestinians.
Udi and Linor Harel, father and mother of Pazit, Malachi, Itamar, and Hadas, announced yesterday that their experience over the last several days with the conflict-plagued children confined to the family’s three-bedroom apartment has provided them with the skills and wisdom necessary to resolve even the most intractable violent disagreements, including those that have stymied or thwarted diplomats and brokers for generations, such as the century-old Arab-Jewish territorial dispute over the Holy Land.
“We can probably get the two sides to reach an agreement inside of six hours, seven tops,” predicted Udi, who until Sunday worked as a driving instructor. “If we can get our children to keep their fighting to a minimum, and on occasion even cooperate, we can get ANYONE else to do the same. Intifadas, counter-terrorism operations, military incursions, blockades, and rocket attacks are peanuts compared to the hostilities we’ve defused here.”
“The parties to the Israeli-Palestinian conflict have another think coming if they believe they can just keep fighting,” added Linor, who develops educational materials for a non-profit. “Everyone in this family knows by now that’s unacceptable. Give me some time with the leaders of the parties to the conflict and I’ll get them to see the correct decision, if they know what’s good for them. For starters, if I hear or see evidence of a single Molotov cocktail, that’s no allowance for two weeks. Uh, not that there’s any way to leave home to spend such money in the near future, but still.”
The Harel children offered cautious agreement. “If Mom can get Malachi to stop invading my personal space, maybe she can do better than those idiots who ran the Oslo process,” assessed Pazit, 14. “He’s so annoying! I swear, if I hear [the children’s Passover song] ‘Simcha Rabbah’ [‘Great Joy’] as ‘sim chara bah’ [‘put feces in it’] one more time I’m going to shove his smartphone up his… disease vector.”
“Oh my God, this nightmare has to end, and then maybe Dad can tackle smaller problems like the political conflict,” concurred Itamar, 8. “That is, if Pazit sticks to her side of the bargain and shuts up about her stupid social life and how this situation is killing it. Hello? It won’t be your social life that I end if I hear one more gripe about missing a friend’s birthday party.”