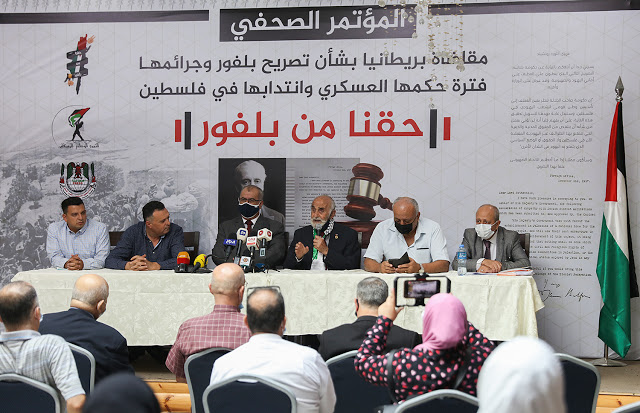 The National Gathering of Independents, the International Foundation for the Follow-up of the Rights of the Palestinian People, and the Palestinian Journalists Syndicate have filed a “lawsuit” in Palestinian court against the British government “regarding its responsibilities for the suffering of the Palestinian people during the period of the mandate,” specifically the “sinister Balfour Declaration.”
The head of the National Assembly of Independents, Munib al-Masri, said that his group was created as a result of the “National Strategy Conference” held earlier this year to confront the Trump peace plan.
The head of the Follow-up Committee, Muhammad Barakeh, claimed that the Palestinian judiciary has the jurisdiction to legally rule on these issues.
For his part, the head of the Palestinian Journalists Syndicate, Nasser Abu Bakr, said, “We have friends, institutions and parties that support us in Britain,” who can influence British public opinion. He announced that an international media campaign would be launched parallel to this lawsuit, stressing that “all the Syndicate’s capabilities would be available for the success of this approach.”
Which shows how objective Palestinian journalists are.
Lawyer Nael El-Houh claimed that experts in international law concluded that there is no objection to suing Britain for British Mandate and the Balfour Declaration, especially after Palestine obtained the status of an observer state in the United Nations.
In the event that the Palestinian judiciary decides to hold Britain responsible, every Palestinian who was affected by the British Empire can sue individually.
The lawsuit was filed n Thursday at the Nablus Court of First Instance.
The actual legal importance of this action is roughly equivalent to the results of a high school moot court competition.
One thing you have to say about Palestinian Arabs – they are really great at creating stunts.