If Israel shares responsibility for Arab refugees with the Palestinians and Arab states, then the same logic applies to Jewish refugees from Arab countries. Lyn Julius offers reasons why in JNS News:

Not long ago, I heard emeritus professor of Tel Aviv University Asher Susser give a talk on the Israel-Palestine conflict. He came to the following conclusion:
The conflict is insoluble because the Palestinians and Israelis have two irreconcilable narratives. And the Palestinians will never give up their so-called “right of return.”

Yet as I pointed out to him, two sets of refugees arose out of the conflict: one Arab and one Jewish. The Jewish-refugee issue has been solved, but there was an incontrovertible (and irrevocable) exchange of roughly equal refugee populations between what is now Israel and the Arab world. Such exchanges happened in the India-Pakistan conflict, between Greece and Turkey, and between Greek and Turkish Cyprus.

Professor Susser acknowledged that Israel would never accept 5 million Arab refugees (this number, uniquely, includes their descendants). The responsibility, he said, should be shared with the Palestinians and the other Arab states.
Maybe the professor was playing Devil’s advocate, but his reply is one I have heard from Arab sources: What have the Palestinians got to do with the Jewish refugees?

When I replied that the Mufti of Jerusalem embodied Palestinian antisemitism, inciting the 1941 Farhud massacre of the Jews in Iraq, he countered by saying the Mufti was just one man, and there were other causal factors behind the Farhud. 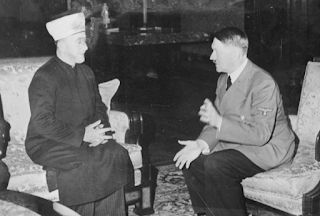 The Mufti of Jerusalem meeting Hitler in November 1941. He wanted a free hand to exterminate the Jews not just in Palestine, but across the Arab world

Yes, the Palestinian Mufti was just one man. But he was the de facto leader of the Arab world, where popular opinion was overwhelmingly pro-Nazi. He aligned himself with pro-Nazi nationalists to overthrow the Iraqi government. He took refuge in Berlin with 60 other influential Arabs, there to broadcast virulent anti-Jewish propaganda over Radio Berlin with a view to facilitating the extermination of the Jews, not just in Palestine, but across the Arab world.

Palestinian and Syrian pro-Nazi nationalists had taken control of levers of power in Iraq, and they, too, bore responsibility for inciting anti-Jewish hatred.
The Palestinians, therefore, helped lay the groundwork for the forced exodus and dispossession, under color of law, of the peaceful, non-combatant Jews from the Arab world – branded by Arab League states “the Jewish minority of Palestine.” Seven Arab League states, egged on by the Palestinian leadership, made the fateful decision to wage a war of annihilation against Israel. They must bear responsibility for creating both refugee problems.

Israel took responsibility for resettling 650,000 people over the years—the majority of Jewish refugees. But by Professor Susser’s logic, responsibility for causing the Jewish-refugee problem should also be shared with the Palestinians and Arab states.

The “right of return” is possibly the single greatest obstacle to peace. It is quite clear that the Palestinians, supported by their exclusive agency UNRWA, will never give it up. But this is a fictitious right in international law, a ruse to reverse Israel’s victory in the 1948 war by demographic means.

Why has the international community indulged this destructive fantasy?
Of the 135 million refugees produced through conflict in the 20th century, only the Palestinian refugees, their children, grandchildren and great-grandchildren have not been absorbed 70 years on, even those who come under Palestinian control in the West Bank and Gaza.

If it really wants to encourage peace, the international community needs to show some tough love, by telling the Palestinians: Get real and stop trying to reverse history. You can choose your own narrative, but you can’t choose your own facts.