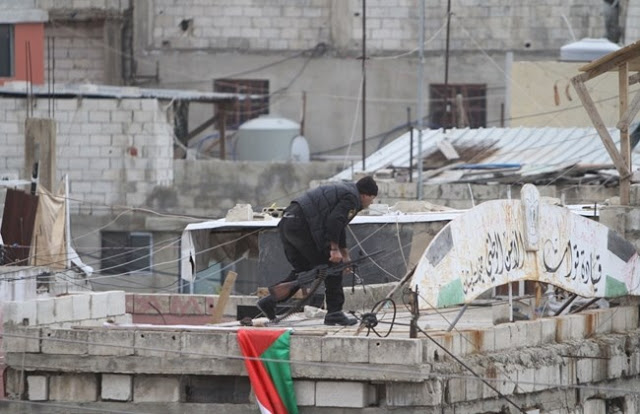 Lebanon’s Ain el Hilweh camp is pretty much run by Palestinians. In some ways, it is a microcosm of how Palestinian self-governance would work.

Two people were killed Wednesday by gunfire in a southern Palestinian refugee camp following the assassination of a member of an extremist faction, a security source told The Daily Star. The source said that Samer Hmeid, a member of militant group Asbat al-Ansar, and known as Samer Nejmeh, was killed by gunmen in the Ain al-Hilweh camp near Sidon. Nejmeh was previously a member of Fatah.

Security sources from within the camp said that CCTV footage showed two individuals on motorbikes make their way to the Safsaf neighborhood – a stronghold of the rival Asbat al-Ansar faction – where they shot Nejmeh and his companion before escaping.
A coffee vendor identified as Mahmoud Saleh was wounded in the attack, and later succumbed to his injuries.

A woman named Alia Hourani also sustained gunshot wounds and was admitted to a nearby hospital.

That’s the headline story, but the rest of this story (behind the Daily Star Lebanon’s paywall) shows that the camp is much worse than the occasional assassination would indicate.

A man named Mahmoud Abu al-Yaman was killed in the Baraksat neighborhood during the gunfire that followed the assassination.

Students in nearby schools fled the volatile Taamir neighborhood to take shelter as tensions heightened at the camp. Announcements were made from mosque loudspeakers calling for parents to pick up their children. Witnesses said that masked gunmen were also seen on the camp’s Tahtani Street after the incident.

A gunfight erupted after the assassination between members of the Fatah Movement and friends and relatives of Nejmeh. Nejmeh’s relatives also fired into the air and targeted shops in the area.

Fatah members erected a barrier to separate the Fawqani Street from the Barakat area.

A Hamas official in the Sidon area, Abu Ahmad Fadl-Taha, told The Daily Star that the movement was attempting to mediate a cease-fire and had contacted all the clashing groups to restore order and calm at the camp.

Hamas is the moderate group there!

Another story in the Daily Star is enlightening as well:

Whatever the pressures that Palestinians in Lebanon have – and they have a lot, as they are forced to live in crowded camps and severely limited in what they can do by the apartheid Lebanese regime – there is no justification for them to turn their communities into a constant war zone.

That, they do on their own.