I received on my mobile phone a picture, what I saw was more like a nightmare.  I asked myself, what do I see? Is it true or is painful past?

I saw the dogs in the form of human beings, the Zionists criminals whose flesh corrupts the pure land, I saw men and women playing in the Al-Aqsa Mosque, using the prayer mat and turning it into a playground for tennis…These stinking dogs are now bragging about their desecration in front of the world, …defiling the first qiblah and the third holiest site: where are the Muslims? Where is the free world?

Jewish extremists, the Zionist criminals, and are now applying what they had planned, and like it or not we are spectators, they described Arabs as stupid…Saladin will come , O Zionist criminals, you know it ‘s soon, and your evil will be expelled, and humiliated, and the Muslims will enter the house, God willing .

…Jewish criminals will not survive, ye apes and pigs. There is great difference between us and you, we are guardians of God and you are the parents of demons and evil .

There are a lot of other colorful curses on Jews but I couldn’t figure out the translation.

I had discussed this claim last year. Here’s the photo that this idiotic writer is referring to: 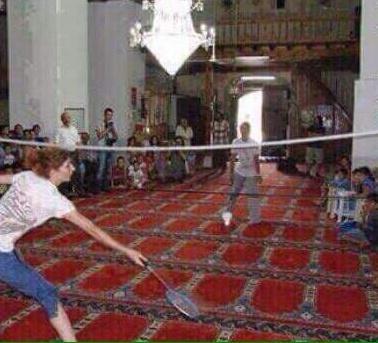 It was at a mosque in Turkey, not Jerusalem, where, besides badminton, they also taught children karate and soccer – in order to get the kids more interested in visiting mosques.

As to the writer’s claim that Jews regard all Arabs as stupid – well, if the shoe fits, Mr. Hadid….