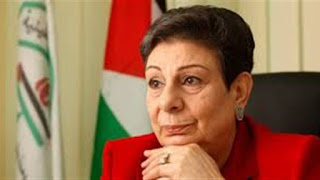 As the Palestinians continue to go through the motions of planning for an election that will never happen – because Fatah and Hamas will never agree to how it should be done – the PLO is showing that the elections are really an excuse to wrest sovereignty away from Israel, specifically in Jerusalem.

I wrote about this last week, and events are showing it to be true. The PLO is in a full diplomatic offensive demanding that the nations of the world pressure Israel to allow Arabs to vote in Jerusalem.

PLO Executive Committee member Hanan Ashrawi on Wednesday met with the Slovenian representative to the PA as well as the British consul in Ramallah and she emphasized the importance of holding elections in Jerusalem. Ashrawi “called on Britain to support the elections and to intervene to make them successful and create the right conditions for them, especially in occupied Jerusalem,” reports said.

She had a similar meeting on Monday with the Swiss envoy to Ramallah, making the same demands. She frames it as how important elections would be for unity and peace, but tells these diplomats that Israel is the obstacle to the elections because it won’t allow them in Jerusalem.

Ashrawi has set the stage for demanding the international community pressure Israel on elections for at least a month.

She has reason to be optimistic. In 2006, after pressure from US President Bush, Israel agreed to allow Jerusalem Arabs to vote at post offices under Israeli police supervision.

Obviously, if the elections were the important thing, the Jerusalem issue could be worked around – absentee ballots, allowing Arabs to travel to Areas A and B, or other technical solutions that could ensure any Arab who desires could vote. But the elections aren’t what the PLO cares about – taking away any amount of Israeli sovereignty is its overarching goal.