What do you call it when someone insults a group of people when the only thing known about them is they are religious Jews?

Next week, a group of religious Jews – we only know the name of the organizer, Lazer Scheiner of Monsey – is holding a luncheon in honor of President Trump. The official reason given is to thank him for what he has done for the Jewish community. Even though it is not officially a fundraiser, it is rumored to raise millions of dollars for his re-election campaign – the cost to attend is reportedly $25,000 a seat.

The reason given for the event when it was floated in July was the strengthen the connection between the president and the religious Jewish community in America. 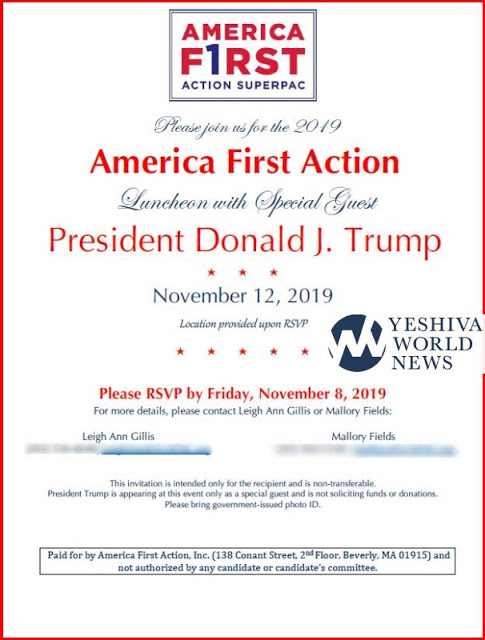 This sort of thing happens all the time.

But when Orthodox Jews are the people bhind it, antisemitism cannot be far behind – the antisemitism of the Left. 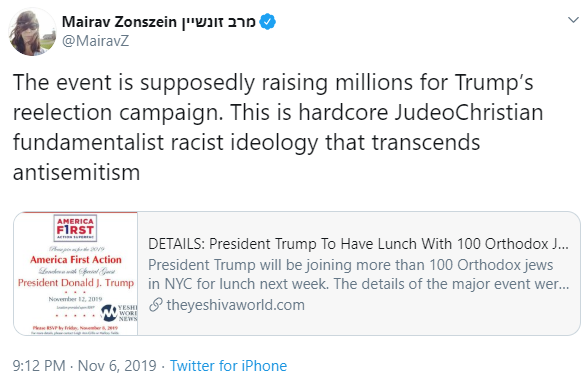 Literally the only thing Zonszein knows about this group is that they are Orthodox Jews. Based on that one fact, she accuses them collectively of a “hardcore JudeoChristian fundamentalist racist ideology.”

Calling someone a “racist” in Leftist circles is as insulting as the “N” word. It is the worst insult possible. And it is one that requires no evidence.  This is simply an insult to Orthodox Jews as a group. It is nothing less than pure antisemitism.

I highly doubt that the Jews who support Trump believe that he is a poster child for morality, or that he is a religious man. They don’t think that his values are congruent with Torah values. As with any other group, they simply want to have influence on US politics. This lunch is nothing more than politics, and this sort of event happens hundreds of times a year from other groups, whether they are Hispanics or pharmaceutical companies.

But Orthodox Jews who act in their own political interest are singled out by the Left as being hardcore fundamentalist racists. They are all lumped together as “whites” who hate people of color. There is not an iota of evidence for this. Their yarmulkas are all the evidence leftists like Zonszein need.

Since a group of visible Orthodox Jews supporting Trump hurts the Leftist talking point of Trump being an antisemite, Zonszein makes the nonsensical addendum that the “racism” of the group “transcends antisemitism.” Somehow, the racism of Orthodox Jews is worse than antisemitism, because…well, Jews.

Zonszein has written for the New York Times, The Washington Post, The Nation and other outlets. This antisemitic bigot is respected by mainstream media.

It is significant that the very people who claim to be most sensitive to bigotry and racism can engage in bigotry like this and not get called out in it from their fellow leftists. This kind of antisemitism is perfectly OK, because it masks itself as anti-racism. That doesn’t make it stink any less.