Muslims are upset that the visiting hours to the Temple Mount for non-Muslims has been extended an additional hour in the mornings. Today the hours that “Jewish extremists” could visit were from 7 to 10:30 AM. Sheikh Ikrima Sabri warned that this is very dangerous. The “settlers” attempted to perform “Talmudic rituals,” according to the stories.

Israel is expected to allow some Gazans to work in Israel for the first time since 2000. Reports say that the final details are being worked out, such as how many and if they would be allowed to stay overnight.

Mahmoud Abbas has removed the immunity of some Fatah MPs that oppose him, in preparation to prosecute them for various supposed crimes. the MPs are supporters of Mohammed Dahlan.

Islamic Jihad released a peaceful video for the occasion of Mohammed’s birthday.

Arab media reported that there has been a marked decrease in terror attacks (“resistance operations”) during November compared to the previous month. Here are the Shin Bet statistics: 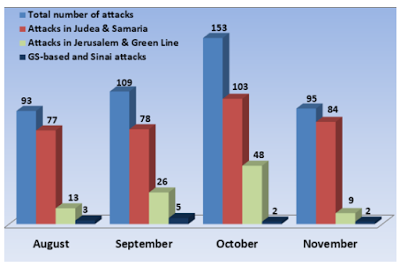 Egypt closed the Rafah crossing again after three says of allowing certain people to cross both ways between Egypt and Gaza. The crossing has been open a total of 35 days this year.