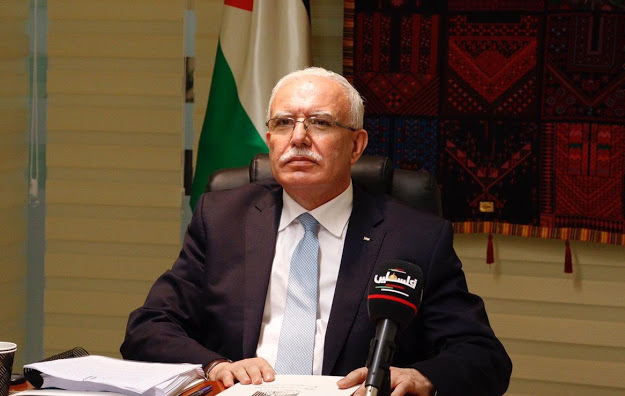 The Arab League was founded in a large part in response to Zionism. Its first major actions were to gain consensus among Arab states for boycotting Jews in Israel and even though Arab states have always disagreed strongly about virtually everything, they could always pretend to agree how much they hate Israel, so the Arab League was able to maintain a pretense of unity through its many anti-Israel resolutions.
Zionism may be what destroys the Arab League.
This morning, the PLO “foreign minister” Dr. Riyad Malki gave a speech to the Arab League where he expressed the Palestinian frustration at the lack of response by the Arab League to the UAE’s decision to make Israel an ally.
But he went further than that.
Malki said that usually any joint Arab actions at the Arab League supporting the Palestinians were  “only for show, not implementation…But there was neither commitment nor respect for these decisions.”
He called this “duplicity” and said that it put “Palestine” in many embarrassing situations, particularly when non-Arab countries would note that what they hear behind closed doors from Arab governments contradict their Arab League commitments (speaking of payments to the PLO and “supporting Jerusalem.”)
“We would boast about the Arab resolutions,” Malki said in his speech, “only to be told that those were nothing more than just ink on paper.”
He explained that even asking for an extraordinary meeting of the Arab League to condemn the UAE proved strenuous. One country refused and asked for an ordinary meeting, and later refused to even add the Israel/UAE deal to the agenda, while another threatened to table an alternative communiqué from the one that the PLO would have written, expecting a rubber stamp as they always have gotten.
A frustrated Malki said, “How do we explain these acts? Are they determining what became acceptable or not for the Arab League meetings? Who defines this? Those with influence and money or who? Did Palestine go too far by asking for an extraordinary meeting or by adding an item to the agenda? Did Palestine cross pre-determined, but not declared, red lines?”
Malki then went on to ask whether the Arab League is even committed to its own Arab Peace Initiative of 2002.  “Is this initiative for show? If so, we need to know that. Is it for implementation? If so, what do we do about those who violate it?”
He went on to say that unless the Arab League publicly opposes the UAE/Israel deal, the meeting would be considered to be blessing this deal, colluding with it or providing it with a cover. “This will not be accepted by the State of Palestine.”
If the Arab League can no longer be relied on to consistently oppose and condemn Israel, the last fig leaf for its existence as a unified voice of the Arab world goes away.