The “Justice for All” campaign, on a new website called “FreedomFuture.org,” was set up by the BDSers from the Adalah Justice Project and the US Campaign for Palestinian Rights. Together with many partners like Jewish Voice for Peace, the American Friends Service Committee, the Democratic Socialists of America they have a list of “demands” that use all he correct “progressive” buzzwords while building a case to ethnically cleanse Jews from the river to the sea, meaning an entire Middle East that is Judenfrei.

Demands include Palestinian self-determination (including in Israel), the “right of return” (where there is full freedom for Palestinians to live wherever they want but Jews have no such right,) “freedom for all Palestinians” which is just a veiled accusation that Israel discriminates against all non-Jews, and the “the right to resist our oppression” in which they never say that “resistance” is only peaceful – meaning it includes terrorism.

All of these codewords have been used for years to fool liberals into thinking that destroying the Jewish state is a valorous cause.

One demand absurdly says they want “the freedom to build our own just and liberated society that is free of classism, patriarchy, homophobia, racism, ableism, and bigotry in all forms.“ 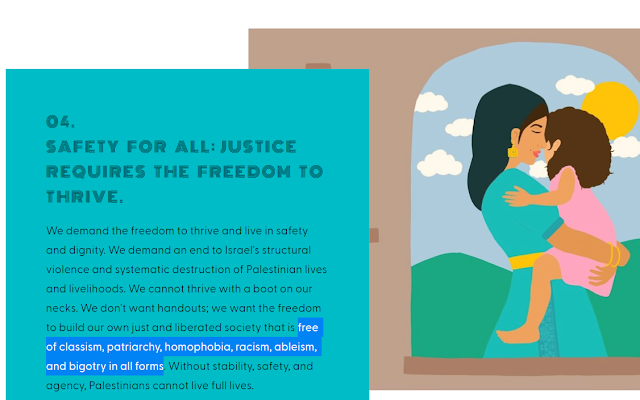 Surveys have shown that Palestinians are among the the least liberal people on the planet. An astonishing 89% of Palestinian Muslims say they want Sharia to be the law of the land – and most of them approve of stoning for adultery and chopping off hands for theft. 89% say homosexuality is morally unacceptable and 92% say drinking alcohol is immoral. 37% say “honor killings” are justified.

It is had to imagine a less tolerant state than the one that Palestinians in the PA and Hamas controlled areas themselves want – these numbers are in Taliban territory.

These so-called progressives do not lift a finger to help Palestinians change their xenophobic, antisemitic and intolerant attitudes. Instead, they are gaslighting uninformed liberals in the West into thinking a Palestinian state would be a beacon of light and equality.

The entire initiative is meant to ethnically cleanse Jews from the area. Indeed, nowhere in the entire website does it even pretend to say that Jews would live as equals in the Palestinian state they “demand.” This is intolerance disguised as progressivism, and it is a shame that so few true liberals call them on it.