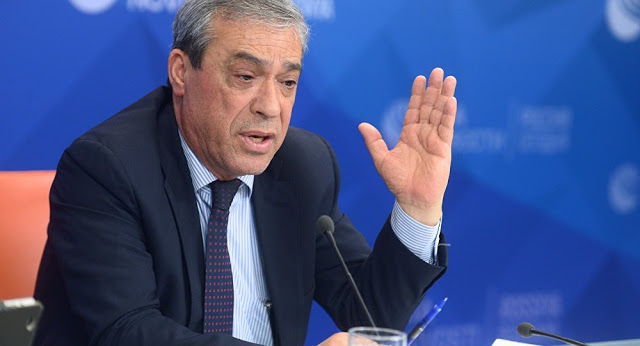 A confederation could range from a loose agreement to uphold common principles to a very tight relationship that is just short of sharing sovereignty.

The statement has caused a kerfuffle in the territories as people are wondering if this is the official Palestinian position.

It is somewhat consistent with the Palestinian constitution that emphasizes how much “Palestine” is part of the Arab world.

Jordan has rejected the idea of confederation with the Palestinians for decades.

Last September, PA president Mahmoud Abbas said, bizarrely, that he was interested in a tripartite confederation with Jordan and Israel:

Palestinian Authority President Mahmoud Abbas has voiced interest in a tripartite confederation with Jordan and Israel, in what would appear a dramatic departure from his longstanding insistence on a two-state solution, according to Israeli peace activists and a Palestinian official.

According to the dovish Peace Now group, a senior delegation of which met Abbas on Sunday in Ramallah, the Palestinian leader said senior US administration officials Jared Kushner and Jason Greenblatt asked him recently about his opinion of a “confederation with Jordan.”

“‘I said [to Kushner and Greenblatt]: Yes, I want a three-way confederation with Jordan and Israel.’ I asked them if the Israelis would agree to such a proposal,” a statement by Peace Now quoted Abbas as saying.

It becomes more apparent over time that Palestinian Arab leaders have very little interest in actually running a state themselves.

Nawfal also had another interesting meeting:

A press conference on the occasion of Quds Day was held today at the headquarters of the Russian Federation, which included the ambassadors of the Islamic Republic of Iran, the State of Palestine and Iraq, as well as the First Deputy of the Russian Mufti.

In an interview with “Sputnik” the Palestinian ambassador in Moscow Abdul Hafiz Nawfal praised the initiative of Imam Khomeini on Quds Day, and said:

“We appreciate the great initiative of Imam Khomeini on Jerusalem, and we consider it an honor to all of us. We remember and emphasize on this occasion the importance of Jerusalem, not only the Palestinian people, but all peoples and foremost the Iranian people. We thank Iran for this initiative and approach, to reach a Palestinian State with East Jerusalem as its capital.

Given that Iran doesn’t accept Israel in any solution, this praise of Iran’s position perhaps is more relevant than any talk of a two state solution or a confederation.