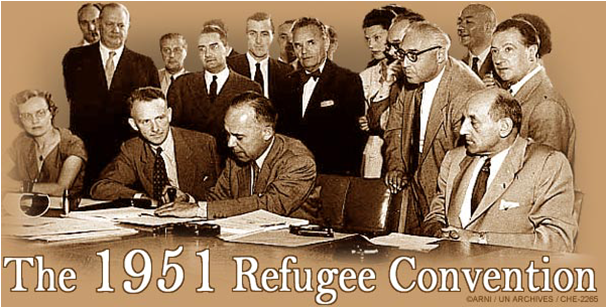 As a followup to my post about UNRWA and defining refugees, it looks like the reality is a bit simpler than I thought.

I asked an international legal scholar about UNRWA’s definition of refugees, and he responded simply “There is only one treaty that defines refugees – the 1951 convention.”

Reading the Refugee Convention more carefully, this is in fact the case. It doesn’t say that Palestinians are or aren’t refugees; it merely says that they are not eligible for protection under the Refugee Convention because UNRWA already existed. Their refugee status is simply not addressed in the Convention – because there is only one definition.

Likewise, in their carefully written policy documents, UNRWA doesn’t define the people registered with UNRWA as “refugees.” They refer to them almost invariably as “Palestine Refugees.” sometimes with the word “refugees” capitalized,  but that is nomenclature, not descriptive.

UNRWA also takes pains to say that they are using the term only for the purposes of determining who is eligible for services, not as a legal term. It is a working definition.

UNRWA is not trying to define the term “refugee,” because it cannot do that: the Refugee Convention is the only place the term can be defined. All UNRWA can do is decide who they want to provide services to, and the main (but not only)  category of those people is what they name “Palestine Refugees.” It doesn’t mean that they are real refugees any more than the UN calling Gaza “Occupied Palestinian Territory” means that Gaza is legally occupied – something the UN essentially admitted.

It is simply a word game.

Let’s look again at UNRWA’s definition in its “Consolidated Eligibility and Registration Instructions” with this in mind:

Palestine Refugees as Defined by UNRWA

Anyone whose normal place of residence was in Mandate Palestine during the period from 1 June 1946 to 15 May 1948 and who lost both home and means of livelihood as a result of the 1948 Arab-Israeli war qualifies as a Palestine refugee, as defined by UNRWA, and is eligible for UNRWA registration. Hence the reference to Palestine refugees, not Palestinian refugees, in UNRWA’s name and official documents.

Here they say explicitly that UNRWA defines what a “Palestine refugee” is but in no way are they saying that they are actual refugees – because only the Refugee Convention can do that.
On the other hand, when the same document refers to “Palestinian refugees” it refers to Palestinians who are real refugees under the Refugee Convention, and therefore (if they are outside UNRWA areas) they are eligible for UNHCR protection. Typically these are refugees from Syria or Iraq who happen to be of Palestinian descent.

UNHCR has a world-wide mandate to protect, assist, and seek durable solutions for refugees as well as for other people in need of international protection. UNHCR’s mandate covers Palestinians who are refugees within the meaning of the 1951 Refugee Convention, which could include Palestine refugees as defined by UNRWA. UNHCR normally takes up the case of Palestinian refugees only when they are outside UNRWA’s area of operations.

Notice how the document distinguishes between  “refugees within the meaning of the 1951 Refugee Convention” and “Palestine refugees as defined by UNRWA.” Only the former are real refugees under international law, because only the 1951 Refugee Convention defines what a refugee is. Only real refugees can apply for asylum in other countries, not “Palestine refugees” (again, unless they are fleeing persecution for other reasons.) UNRWA merely defines who is eligible for their services and, for most of them, they call the “Palestine refugees.” They could call them Blurpies – it would be just as meaningful.

The term “Palestine refugees” is meant to deceive. And UNRWA has done a brilliant job in doing exactly that.