Mosaic has a must-read article surveying hundreds of Palestinian public opinion polls to find out how interested Palestinians are in peace with Israel.

[I]n June 2014, the Washington Institute’s David Pollock commissioned and supervised a survey of West Bank and Gaza residents. In the poll, respondents were presented with three choices for the main Palestinian national goal over the next five years. Working for “a one-state solution in all of the land: a state in which Arabs and Jews will have equal rights in one country, from the river to the sea” garnered 10-percent support. “End the occupation of the West Bank and Gaza to achieve a two-state solution” was backed by 27 percent  of respondents. The runaway first choice, selected by 60 percent of respondents, was “to work toward reclaiming all of historic Palestine from the river to the sea.”

In June 2015, another poll by Pollock and the Washington Institute, this time in conjunction with the PCPO, asked about the main Palestinian goal for the next five years, and again the option of “reclaiming all of historic Palestine from the river to the sea” was the most popular choice. This result is particularly astounding given that participants were not asked about a long-term dream, but about what they saw as the goal during the next half-decade.

We have reported on these results in the past. But there is one other question that Palestinian pollsters have asked over the years.


When asked on sixteen occasions if they would be willing to “adopt [a] school curriculum in the Palestinian state that recognizes Israel and teach school children not to demand return of all Palestine to the Palestinians,” a massive majority, 88 percent on average, said no, and only 9 percent said yes.

This question about whether Palestinians want to teach their children about peace is arguably more damning than the others.  It shows that there is no desire for long-term peace with Israel for the vast majority of Palestinians.

We’ve seen the fruits of such an attitude with the outbreak of Palestinian youth attacking Israelis that we’ve seen over the past 18 months. They aren’t attacking because of “desperation” or “occupation.”  They attack because their parents teach them that the Jews are a temporary blight on their land and it is the job of the next generation to get rid of them. 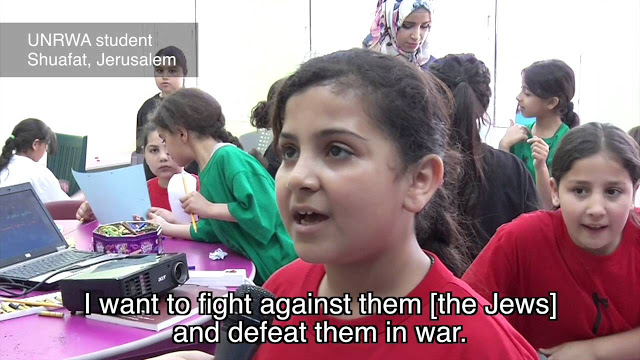 The answers to this question are so damning to Palestinians, apparently, that this question has not been asked since 2008 when only 13% of Palestinians polled supported a curriculum advocating peace with Israel.