I could have taken a photo of Ori Ansbacher’s grieving mother. My finger hovered over the button on my phone as I contemplated the idea. A photo of that face full of pain would have shown the world what a thousand words could not. It would have said, “Look! This is what it means to have your daughter brutally raped and murdered just for being Jewish in Jerusalem, and alone.”
And there would have been value in that. After all, Noa Ansbacher’s face was probably the most wrenching sight I’ve ever seen. Shouldn’t the world see that? See what it is for a mother to lose a child to hatred? Might it not change something in the world, seeing that photo? Could it not make a positive difference?
I considered all this as I looked at Noa Ansbacher’s face, as she sat in her house of mourning. Looking at her, I saw Ori’s face some 30 years away, albeit lined with a heavy sorrow. I saw the same features. Mother. Daughter.
But Ori would not be here in 30 years. Her light has been extinguished. She is buried underground.
Which is the reason for the pain etched on Noa Ansbacher’s face. Unlike Noa, Ori would never have a daughter. She would never have a husband. She would never have any children or grandchildren at all.

She would never have a future.

This being the case, all I could do was look at Noa Ansbacher’s face, and see what Ori might have looked like, had she lived her life. Looking at the mother, I could see the promise, now stolen away. A young girl with her life ahead of her, ended with sudden and brutal finality, stamped out in a flash, like a cloud of evil darkening the world, obscuring all that is good.
The irony of a name, “Ori.” It means: “my light.”
Studying Noa Ansbacher, I knew that for her, the light had gone out. I could see it in her face, though smiles would break through the pain from time to time, as she acknowledged Ori’s friends, who surround her during this terrible time.
Ori’s friends are all she has left of Ori. That and the stack of photos of her girl, left on the low plastic mourner’s chair by her side, for visitors to peruse.
When she is not distracted by the need to be gracious, to love the sweet girls who come to comfort her, who cherished her daughter, Noa Ansbacher’s smile is washed away, overtaken by lines of pain once more. There’s a heaviness to her grief, a thick fog of unbearable pain.
I could have shown you all this. It would have taken less than a second to capture Noa Ansbacher’s face and the scene around her for perpetuity. Perhaps a “real journalist” would have snapped that picture and published it here to show it to you. It would have gotten lots of page views, gone viral.
I could have done it, taken that photo, published it here, and in some ways, it would have been a serious good. A mother’s face, a study in mourning for a daughter stolen away by evil. Blameless, unassailable as Ori was, just a young girl with her life ahead of her. She was meant to do so much.
Anyone who would have seen such a photo of Noa Ansbacher in the depths of her unfathomable sorrow would have remembered her face forever, as I will, an indelible vision of pain. And indeed, seeing her face is the only way anyone could truly understand that pain. The kind of pain a mother exchanges for a life full of light.
Imagine a daughter blotted out by cruel thunderclap after a gentle lifetime of promise. This was a crime dripping with the worst sort of hate and aggression. A crime directed at a sweet young girl, a holy people, and a way of life—a way of life that is wholly good, driven as it is by the life-force, and the bringing of an ancient land alive.
But there was something private in Noa Ansbacher’s face, something I dared not attempt to capture or share. In truth, I could hardly bear look at it myself. Who was I to imagine that I could depict the pain of a mother whose child is murdered in such an obscene and brutal way, for the crime of being Jewish and alone in Jerusalem?
And so I took photos of everything else around me, with the help of my friend and neighbor, who was the impetus behind this visit. Between the two of us, we took photos of everything in and around the Ansbacher’s home. I took photos of the photos of Ori Ansbacher from the stack of photos resting on the low plastic mourning chair beside her grieving mother. With no need for words, Jocelyn stepped in to hold the photos up for me, one at a time.

I took photos of the rolling sand dunes of the Judean Desert, a view that Ori would have seen from the balcony of her childhood home; a home that sits on ancient land: land that belonged to her people for thousands of years. She saw that view for the 19 years she lived her life, a handful of years. An age and a number she would never surmount. 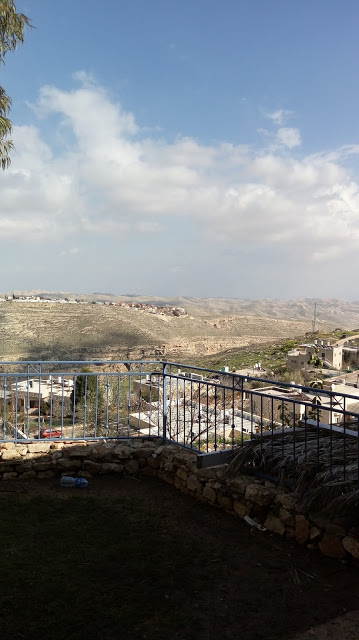 On our way out, Jocelyn stopped so I could take yet more photos. I took photos of Herodian, where Herod built a summer residence. The flattened mountaintop looms in the distance from everywhere within the town of Tekoa, where Ori grew to womanhood and where her mother yet grieves. It is impossible to forget one’s history when one lives with such a view. 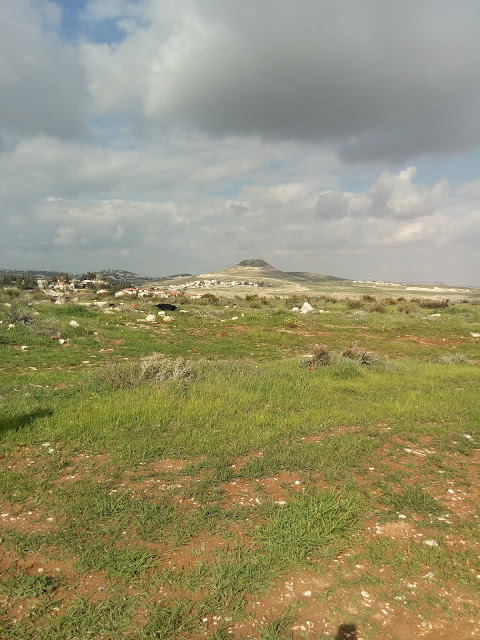 And the anemones. I could not leave without getting some photos of the bright red flowers that grow in such profusion close to the Ansbacher home at this time of year. These would have been old friends to Ori. In Hebrew they’re called “kalaniyot.”
No doubt the same flowers can be found in the Ein Yael forest in Jerusalem, where Ori sought solace and met instead, a brutal end. The kalaniyot are everywhere now, the bright scarlet notes breaking through the hillsides, so red against the green of the grass and the blue of the sky.
The anemones were, perhaps, the last beautiful thing Ori Ansbacher would ever behold.
They were a harbinger of spring.

A spring she would never see. 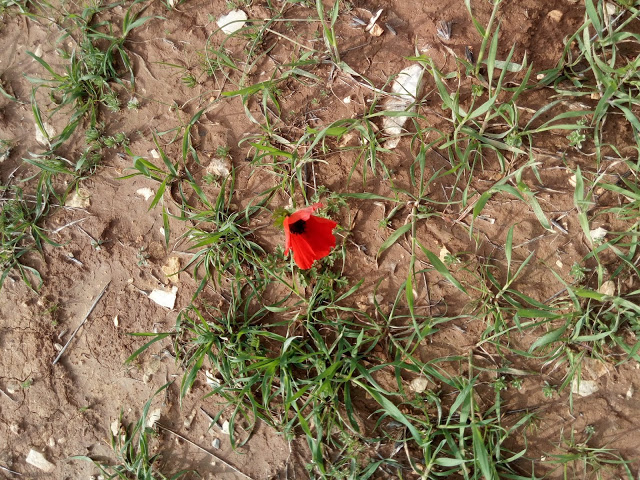