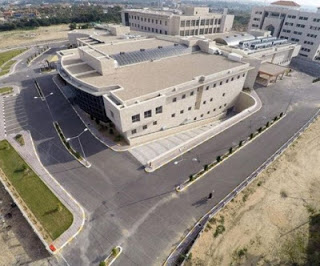 As we’ve reported, a US NGO called Ships plans to open up a hospital in Gaza near the Erez crossing, and the Palestinian Authority has been bitterly opposed to it, ludicrously claiming that the hospital is really a joint US/Israel military base.

The hospital will use equipment and staff from a similar field hospital in Syria that is no longer needed.

The PA’s main problem seems to be the name of the hospital, the American Hospital. The honor/shame culture cannot deal with that. (It is also upset that Israel has cooperated with Hamas on building this hospital.)

Turkey announced this hospital to much fanfare in 2018, which was to be jointly run between Turkey and the PA, but it never opened due to financial and staff shortages. For some reason this was not considered a scandal.

Now, Shtayyeh is saying that he is negotiating with Turkey on finally opening this hospital. “We are in the final stages of agreeing with our Turkish friends to cover the operating expenses of this hospital,” Shtayyeh said today.

It is hard to explain how petty and uncaring the Palestinian Authority is for its own people and how willing it is to use Palestinian lives for political purposes. This Turkish hospital has been empty and unused for an entire year, but only now that the PA wants to not look like idiots for opposing another Hamas-approved hospital does it make any moves to open the Turkish hospital.

Both the Turkish and American hospitals were approved by Israel, proving yet again that the Jewish state cares more about Palestinian lives than the Palestinian Authority does.