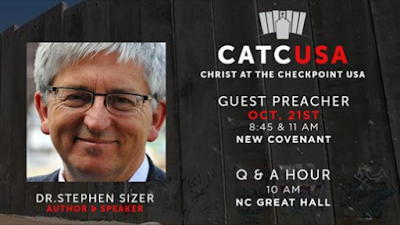 This year, the Christ at the Checkpoint (CATC) Conference, a bi-annual Israel-bashing event dedicated to undermining Christian Zionism and founded by Palestinian activists in Bethlehem eight years ago, is being held in the United States for the very first time.

As reported inter alia here, Luke Moon, deputy director of the Philos Project, believes that while CATC will in all likelihood not “turn a significant number of evangelicals against Israel, he believes their attack on Christian Zionism is anti-Semitism in disguise” and has expressed surprise at finding that Stephen Sizer, CEO of the so-called Peacemaker Trust (which appears to be more obsessively concerned with attacking Israel than ever before) is a speaker:

“I kept asking myself, are the organizers so foolish to cast such a negative shadow over the conference. It became clear that Sizer’s work in fighting Christian Zionism was more important than his anti-Semitism.

This shows me two things about CATC. First, it shows that they are not as concerned about anti-Semitism as they claim. Second, they fail to recognize how inviting Sizer undermines their efforts to attract Christians to their cause.

Anti-Zionism seeks to delegitimize the claims of the Jewish people to the land of Israel. It is the connection to that land, the shared memory and hope that one day they would be restored to their land, Zion, that preserved the Jews as a particular people among the nations they lived. Anti-Zionism seeks to strip that away.

I believe there is sufficient evidence to show that attacking Christian Zionism not only harms Jewish-Christian relations, it leads to an environment where it’s not just the relations that are harmed, it’s the Jews themselves.”

Meanwhile, Sizer (who is apparently hoping to visit Atlanta and Seattle next year) is miffed that the first  review of the Kindle edition of his (Sizer’s) notorious book Zion’s Christian Soldiers is a critical one, albeit measured, by James Mendelsohn, and is requesting his social media faithful to post their own to neutralise it.

A clear example of this is his statement on pp. 69-70: “The ‘dividing wall of hostility’, typified by the barrier that separated Jews and Gentiles in the temple, has been broken down by Jesus Christ. It is ironic, if tragic, that despite his willingness to comply with all the petty temple regulations concerning ritual purity, Paul would eventually be arrested for allegedly bringing Greeks into the temple and defiling God’s house (Acts 21:28-29).

Today, their successors in the government of Israel are seeking to erect a much higher and longer ‘separation barrier’ to preserve their racial identity and exclusive claim to the land of Palestine.” The phrase, “Today, their successors…” seems to imply that Jews, or at least Jewish leaders, are incorrigibly racist. Since there are both Jews and Arabs both to the East and to the West of Israel’s security barrier, Sizer’s claim is demonstrably false. Rather, the security fence was built to stop Israelis being killed, and has been demonstrably successful: 431 Israelis were killed in 137 suicide bombings between September 2000 and the completion of the northern and most of the Jerusalem sections of the wall, 100 in March 2000 alone.

After the completion of the wall in the north, there was not a single terrorist attack across that section. By December 2004, the number of suicide attacks launched from the West Bank had fallen by 84% in less than two years. (Figures from Sir Martin Gilbert’s updated Israel, A History, p. 631.) Since Sizer neither mourns these Israeli dead nor condemns (or even acknowledges) their killers, and instead denounces the structure designed to protect Israelis as a symbol of racist imperialism, it is hard not to conclude that he has no objection to Israelis being killed. (This is not to deny that the wall undoubtedly causes serious hardship and suffering to the Palestinians; nor that the wall cuts into land beyond the Green Line, which could otherwise have been allocated to a future Palestinian state.)

Sadly, this is not an isolated instance in Sizer’s book. At page 8, the Union of Jewish Students (i.e. your friendly local J-Soc) is cast as an opponent of intellectual freedom. On page 10, Sizer asks, “Why is Israel allowed to retain nuclear weapons, while Iran is threatened with a pre-emptive attack for aspiring to obtain nuclear technology?”, yet inexcusably fails to mention that Iran’s president has denied the first Holocaust and has threatened to perpetrate a second. At footnote 12 on page 6, Sizer draws on the conspiracy theories of Mearsheimer and Walt. In a footnote on page 15, he refers approvingly to the flawed and highly partisan works of Jimmy Carter and Ilan Pappe, and also to Uri Davis, a PLO observer member who helped to promote the antisemitic play “Perdition” in the 1980s, which alleged that Zionist leaders collaborated with the Nazis in perpetrating the Holocaust.

Sadly, this in keeping with an author who demonises supporters of Israel as “people in the shadows” and for whom Uri Davis, neo-Nazi favourite Israel Shahak and Holocaust-denier-defender and intellectual crook Noam Chomsky are “leading Jewish academics”. For all that Sizer says that “Anti-Semitism must be repudiated unequivocally” (p. 15), some of his terminology and sources seem to point in the other direction. It is surely not a coincidence that, in 2015, Stephen Sizer was censured by Andrew Watson, the Bishop of Guil[d]ford, for posting “clearly anti-Semitic material” on social media.

Saddest of all, though, is the fact that, Zion’s Christian Soldiers? has, like Sizer’s previous book, been published by Inter-Varsity Press, a reputable Christian publishing house, and has been endorsed by various prominent Christian leaders, including Dick Lucas and Rico Tice. One might not expect reviewers to check every source and factual assertion (though we might hope that a responsible publisher would), but frankly this is of little comfort to those of us who are Jewish, who recognise antisemitism when we see it, and who are all too aware of what antisemitism has led to through the centuries….’

*When will Sizer clear out that Augean stable?!