Gorgeous George’s tweet at left, retweeted by numerous Israel-hating Corbynistas and others,  is a reaction to the interview Jeremy Corbyn gave a couple of days ago to the BBC’s Andrew Marr.

To quote the Jewish Chronicle inter alia here, accompanied by a still of the Labour leader addressing the Palestine Return Centre in London five years ago (see a video of that mischievous talk here or see it in the video below):


‘Jeremy Corbyn ducked an invitation to express personal remorse over Labour’s antisemitism crisis in a TV appearance on the eve of the party’s conference.

Interviewed on BBC1’s The Andrew Marr Show on Sunday morning, he was asked by the presenter if he would look into the camera and apologise to Jewish viewers….’

See the interview below.  “Jeremy Corbyn, are you an antisemite?” asks Marr at 8:00, introducing a topic that occupied almost 50 per cent of his interview with Corbyn.

Stiff but polite questioning by Marr, who drives home the point that Jews can best determine what is antisemitism, and plays back to Corbyn an interview Marr did with Lord Sachs, the former Chief Rabbi:

Among the Corbynistas who have got themselves into a twist over Marr’s interview is a chap called Giles Leveson-Gower.  Now, the Leveson-Gowers are a patrician English family, not, one would have thought, the type to join the Labour Party in order to vote in Corbyn as leader.  Whether Giles is using a pseudonym I know not, but he’s certainly no fan of the Zionist Entity, as his Twitter page and this too indicates.

With regard to the Marr interview, Giles in an exchange on Facebook: 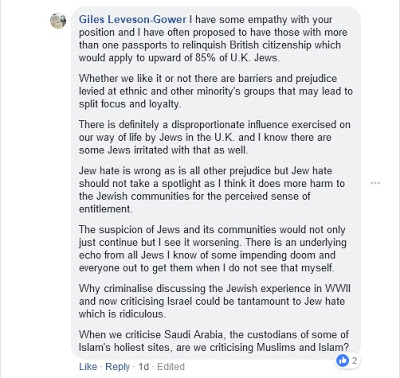 Upwards of 85 per cent of British Jews with two passports?  What’s prompted that idea?

Aha!  Could this Jewish Chronicle article (read it in full here) have been misinterpreted by our double-barrelled friend?


‘More than 85 per cent of British Jews think Jeremy Corbyn is antisemitic, according to polling carried out for the JC. A similar percentage believe there are significant levels of antisemitism at all levels of the Labour Party.

The survey, undertaken by polling company Survation between August 12 and September 4, shows that 85.9 per cent of British Jews regard the Labour leader as antisemitic, while just 8.3 per cent believe he is not.

In a recent Survation poll among the general public, 39 per cent said Mr Corbyn was antisemitic….

In a poll earlier this month among the general public, 43 per cent said there were “high” to “very high” levels of antisemitism within Labour.

The poll was conducted after the Labour leader was at the centre of further rows. In July, photos of Mr Corbyn surfaced from a 2014 event in Tunis, where he laid a wreath commemorating the terrorists behind the Munich massacre of the Israeli Olympic team in 1972. In August, a video emerged of him speaking at a 2013 event, during which he said of British “Zionists”.

“They clearly have two problems. One is they don’t want to study history, and secondly, having lived in this country for a very long time, probably all their lives, they don’t understand English irony either.”‘