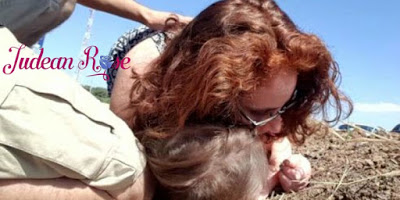 “Shakked was really scared,” my son said, when asked how he and his young family had managed during the rocket attacks on Shabbos and Saturday night.
That was more than it would be usual for my quiet son to volunteer. Which is how I knew that what he’d written on the family Whatsapp group was an understatement. But since I am a writer and my mind runs wild, I could picture how it was that night, in a small room in Southern Israel. Two young parents, a sleepy three-year-old and exhausted one-year-old, with sirens and explosions going off all night long, one siren interrupting the next, explosions upon explosions, some farther away, some much too close, making the people in the room, jump. I imagined my granddaughter crying, perhaps screaming in fear, and her parents trying so hard to comfort her, while being helpless to reassure her in any real way, or to do anything about the endless sirens and explosions, to do anything to stop the night.
My mind kept going back to that picture though they were safe now, the next day, having gone to stay with my daughter-in-law’s family in the center of the country until things were calmer.
That bothered me, too. What kind of life is it really, if you have to leave your home to get a break from danger? What kind of home sweet home can you really have when living there puts you and your children in mortal danger? And here were my brave children, building a home in Netivot, in the Gaza Envelope. How should I feel about that?
Proud, of course, even as my mind wrestled with competing narratives: Is it right to raise children in a dangerous part of Israel? Is it right to build a home in a place that suffers from near constant rocket attacks, sirens, and Molotov balloons? Is it right to live in a place where kindergartens suffer direct hits and oncology wards are a target?
What happens, on the other hand, if they leave? If many leave? Will we lose our hold on the land? Which begs the question: shouldn’t more of us move south to strengthen the area, and live under fire, too?
I called my mother in Pittsburgh. I didn’t say a lot. I didn’t need to. She has long wrestled with the same concerns. It is how she felt when I moved to Gilo, and she couldn’t figure out if it was over the Green Line. It is how she felt when I moved to Gush Etzion, which is indisputably over the Green Line. She worried that it was dangerous. That I and my children were in danger.
And yet she came to visit us many times, staying in our home or nearby. Her friends worried about her. During the Second Intifada, when they voiced their concerns on the eve of yet another one of her trips, this time for my daughter’s wedding, Mom dismissed their worries with a wave of the hand, saying, “What’s the difference if a 75-year-old-woman blows up?”
Just the idea of this makes me laugh. My mom is such a Litvak, possessed of such a dry sensibility and humor. She deals with things by making light of them, by minimizing their impact. It’s not that she’s unaware of the danger. It’s that she sees the bigger picture.
And the bigger picture for her was being there for a granddaughter’s wedding.
The bigger picture for me is the mitzvah of living in Eretz Yisroel. I believe in this mitzvah with all of my heart and soul. And if someone said to me: “we need you to move to the South” I would totally go there, in spite of the missiles, the need to be near a shelter at all times, heart racing whenever there is a siren, living to the accompaniment of explosions, lack of sleep, interrupted sleep, interrupted business, interrupted education, interrupted showers, interrupted lovefor crying out loud—yes. I would do it.
My daughter in-law said to me, “Every place here in Israel has its own risks. We choose to live here for many other reasons and we shouldn’t let anyone stop us from doing that.”
This is also true. My friend Ari was murdered for being Jewish while talking on his phone, next to our local supermarket. And his family didn’t leave. None of us did. Efrat is a beautiful place, with great neighbors and every convenience. We doubled down. Our community had more children and named them after Ari. Ari’s daughter got married.
You can’t extinguish us. Not with your sirens, your rockets, your knives, balloons, petrol bombs, stones, kidnappings, decapitations, rapes, terror tunnels, and car-rammings.  Not in Auschwitz with gas. And certainly not in Israel, no matter what you do. 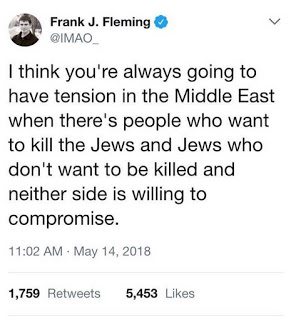 We won’t go. And we will keep getting married and having children. Our children will have children, too.
On the other hand, couples should not be getting married in bomb shelters, but in beautifully appointed wedding halls. My granddaughter, not yet four, should not be losing sleep, afraid in a bomb shelter to the tune of sirens and explosions. She should not have to take shelter, to cower and fear. It is not 1948.

Scout leaders should lead. Children should not have to shield children.

But mistakes have been made. There was Disengagement, perpetuated against the will of the people, by a former hero of the right, under suspicious circumstances. What Sharon did is not so different from what Dayan did.
Moshe Dayan gave away the Temple Mount. We’d just wrested it from the enemy after centuries of longing. No one gave Dayan permission to do that. He just did it. And we are left to deal with the aftermath.
With Ariel Sharon it was expelling thousands of his own people from Gaza, after promising he would not do so. Sharon’s actions have brought here, to a small room in which my granddaughter can’t be lulled to sleep with a lullaby of sirens and explosions.
Disengagement means there is no easy solution. No matter the good intent in the naming of the latest military operation, there will be no “enduring silence” in the South. Not as long as we continue this pattern of letting Hamas build up its arsenal, shoot up the South, and then agree to a ceasefire after killing one or two operatives and taking out a bunch of empty buildings.
Can we go on like this for endless years?
The answer is yes. We can, and if we must, we will. In spite of feeling exhausted and blue at this endless battle.
Because that is what it is to be a Jew. To be an Israeli.
It’s why we have stiff necks. And we also hope. We hope that if we do not know what to do about this state of affairs in the South, someone else will, and if not, we still hope that God will preserve us.
To live in this country one has to have hope. And this is what the children of the South will be hearing tonight, on the occasion of Israel’s 71st birthday. They’ll be hearing the sound of hope, sung louder than ever before. It is a sound that is louder than sirens or explosions or even a little girl’s fear. They will hear no voices faltering, as our anthem is sung, Hatikva.
It’s a song of hope, of two thousand years and counting. And this is the lesson our children are learning tonight.
That to be alive and in Israel is to hope.