Today I plan to interview Einat Wilf and Adi Schwartz on my live webcast (12 noon EDT/7 PM IDT, it will be viewable here.) 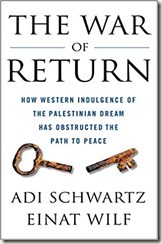 We will discuss the fictional “right of return” for Palestinian Arab “refugees,” the subject of their book that was just released in English, The War of Return.

Ahead of that webcast, here are a couple of articles about that issue I recently found.

In supplementary reports to the General Assembly, Commissioner General John H, Davis, chief for the UN Relief and Works Agency for Palestine Refugees in the Near East, also told the Assembly that:

1. There are “at least 100, 000 dead persons” still listed on the UNRWA relief rolls, but that “rectification” of the rolls has been impossible because the Arab “governmental authorities” considered “the time was not opportune. “

Davis in fact swallowed the Arab narrative whole and later lobbied against the existence of a Jewish state altogether, as Wilf and Schwartz detail in their book.

This second article is from LIFE magazine, written right after the Six Day War. Note the Nasser quote.

People were aware of the problems with UNRWA for decades. But no one has had the political will to do anything about it (until the US pulled funds.)