A piece by Luke Moon in Providence magazine blasts  a New York Times article by David Halbfinger for automatically assuming that every part of ‘East Jerusalem’ is ‘Palestinian’. Silwan was home to Yemenite Jews until the 1930s. Do they have a right to return to their homes?

One would think a story about the US ambassador to Israel celebrating the opening of a new archeology exhibit might include a bit of history. Perhaps it would mention that Silwan’s first inhabitants were Yemeni Jews who in 1881 spent six months traveling to Jerusalem. These Jews were inspired to travel the long, arduous journey on the promise that the Messiah would come to Jerusalem the following year. They arrived broke and were greeted with suspicion by the local Jewish community living in Jerusalem. Settling on the eastern slopes of the Kidron Valley, this group of Yemeni Jews built a thriving community and established a synagogue, the same synagogue that the “right-wing Jewish settler group” is rebuilding and living in. 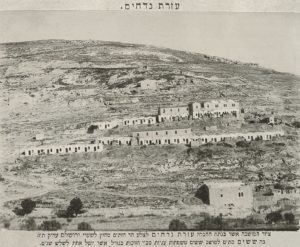 Perhaps an article that mentions the five thousand Palestinian inhabitants might mention how Silwan became a Palestinian village when it started as a Yemeni Jewish village. As the inhabitants in Jerusalem felt more confident to move out of the walled city, the original village expanded to include not just Jews but also Muslim and Christian Arabs, too.

An early British Mandate period census shows Silwan to be a mixed village of almost two thousand people, of which the Jews made up about ten percent. But during the 1936–39 Arab Revolt, the village of Silwan was ethnically cleansed of all Jews, and Arab families moved into the homes of Yemeni Jews. One might wonder if the descendants of those Yemeni Jews still have the key to their homes.

Perhaps an article that praises former ambassadors for avoiding East Jerusalem—since “Israel captured East Jerusalem from Jordan in 1967 and then annexed it” and “most of the world considers it illegally occupied, and the Palestinians want it as the capital of a future state”—would inform readers that the British started the process of annexing Silwan into the Jerusalem municipality, and the Jordanians completed the process in 1952. It seems the problem is not with the annexation but with who is annexing.