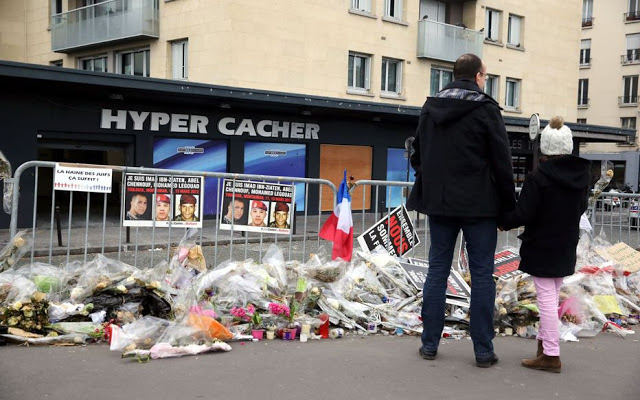 The New York Times writes about the trial in Paris for the alleged Islamist collaborators of the 2015 Hyper Cacher massacre with the headline question: “At Trial, Jewish Victims of 2015 Paris Attack Ask: Why the Hatred?“
The question of why people hate Jews has been around as long as Jews have been around. But the New York Times only gives a single answer:

“The only motive for these crimes is the origin, real or presumed, of these people; their Judaism,” Galina Elbaz, a lawyer representing the International League Against Racism and Anti-Semitism, said at the trial.
“It’s the conspiracy-minded idea that originated with the far right, the idea that Jews have a grip on power,” she said.

I cannot find Ms. Elbaz’ full testimony at the trial, but the head of her organization, the Ligue Internationale Contre le Racisme et l’Antisémitisme writes about the trial on their website, and what they have to say sounds nothing like the tiny part quoted by the NYT:

My purpose was to remind people that LICRA stands alongside the victims of this anti-Semitic crime. The assassin Amedy Coulibaly had said during the attack “You are the two things I hate the most in the world. You are Jewish and French.” Universalism wants all French people to be Jews when there is an anti-Semitic attack. When a Jew is affected, it is the Republic, the whole of France, which is damaged. This process must be a moment of awakening. I would like us to be able to say loud and clear: today we are all Jews and French.
I also wanted to remind you that, from the experience we have acquired at LICRA since 1927, in particular at the Barbie, Touvier, Papon, and Merah trials, and at the trials of the Tutsi genocidaires, it is that hate crime is not based on small reasons. The hand of the anti-Semite who kills is supported by a multitude of complicit hands, a mechanism in which everyone has their share of responsibility in the final act that is committed or in the fact of not having prevented it. If one of the links is missing then the pursued victim is annihilated.

Based on this and other articles on the LICRA website, it is clear that they understand that antisemitism is not strictly a right-wing phenomenon. In fact, it has nothing to do with Right or Left.
Islamist antisemitism may have borrowed from the tropes of an all-powerful Jewish cabal running the world, but that is hardly only a far-Right idea. There is cross-pollination of antisemitic ideas between all antisemitic movements, whether they are Nation of Islam or Arab or Muslim or Black Hebrew or white nationalist or socialist.
One of the founding documents of Soviet “anti-Zionism,” Yuri Ivanov’s “Beware: Zionism,” is based on the exact same antisemitic lie of a cabal of rich Jews (mostly Rothschilds) who are pulling the strings of capitalism and the media. While Ivanov insists he has nothing against Jews, he sure spends a lot of time railing against the “wealthy Jewish bourgeoisie” who are behind Zionism.
Clearly the idea of an all-powerful Jewish conspiracy that holds the reigns of power is not only a right-wing belief, and it animated Leftist “anti-Zionism” from its inception.
Assuming that Elbaz’ testimony about the root causes of antisemitism was longer than one sentence, the New York Times chose to cherry pick her answer to the titular question to only blame the Right for antisemitism – even Islamist Jew-hatred.
Politicizing antisemitism in that way is contemptible.