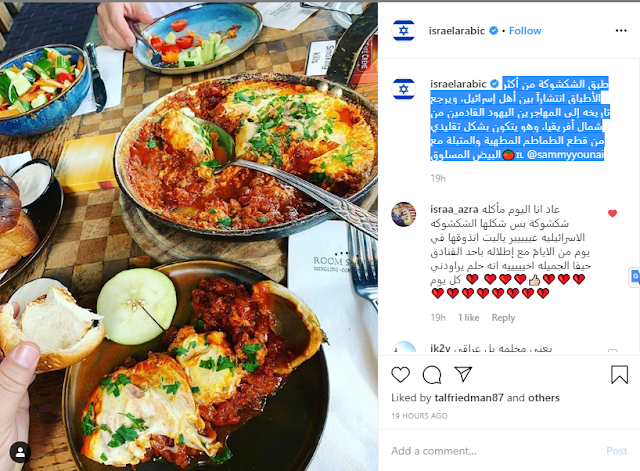 Once again, the Israel Ministry of Foreign Affairs puts something out in Arabic in social media – and
Arabs are freaking out.

The Shakshuka dish is one of the most popular dishes among the people of Israel, and its history goes back to the Jewish immigrants from North Africa, and it consists traditionally of pieces of cooked and spiced tomatoes with boiled eggs🍅🇮🇱

There is nothing inaccurate there – it is talking about how Israel learned about and fell in love with the dish. It doesn’t say Israel claims to have invented it.

But that is not how Arabs are interpreting it:

Roya News showed the post and after going through the supposed history of how Israel stole falafel and hummus, it says, “In the most recent theft of Palestinian and Arab heritage, they stole Shakshuka, and claim it is a Jewish breakfast!”

The Israel Foreign Ministry has certainly hit the jackpot with its Arabic pages. They attract a large audience, many fans, and they make Arabs who complain about it look infantile.