When the news broke late last week that convicted terrorist and US immigration fraudster Rasmea Odeh had decided to accept a plea bargain that requires her to leave the US while allowing her to avoid prison, no one needed to rally the “usual suspects”: anti-Israel activists at Ali Abunimah’s Electronic Intifada and the Orwellian-named Jewish Voice for Peace were quick to reaffirm their support for Odeh by eagerly amplifying the odious statement put out by the “Rasmea Defense Committee.” But these notorious fringe voices were soon joined by Noura Erakat, an assistant professor at George Mason University, “where she teaches in the legal studies, international studies, and human rights/social justice studies concentrations.” Erakat also seems to have some credibility with the US mainstream media; she has e.g. appeared on CNN and PBS and has voiced her views on terrorism in the New York Times, as EoZ highlighted in a critical post last year.
Arguably, Erakat now clarified her views on terrorism when she took to Twitter and described Odeh as “[o]ur sister, our beloved leader;” she also re-tweeted a claim that Odeh was the victim of a “political expulsion;” eventually,  Erakat followed up with a lengthy piece at Jezebel, professing her “mad love and respect” for the convicted terrorist and immigration fraudster. 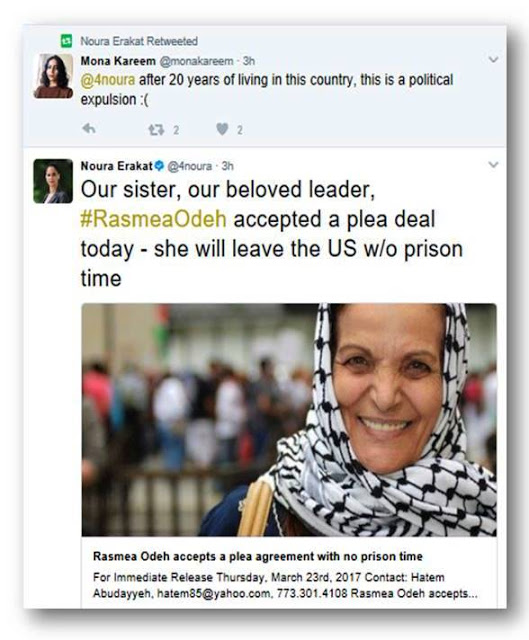 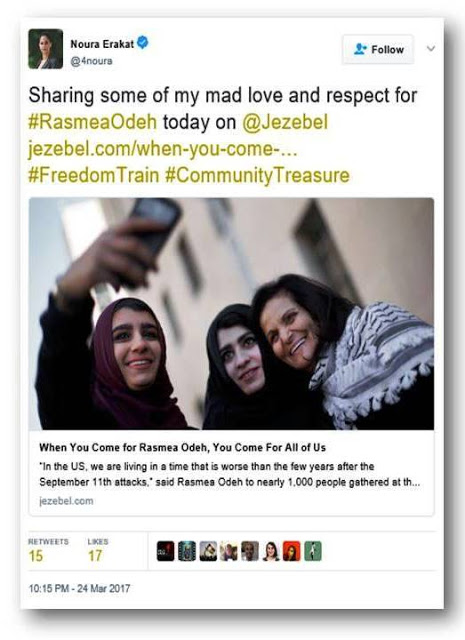 The title of Erakat’s piece, “When You Come for Rasmea Odeh, You Come For All of Us,” implies of course that all left-thinking people should now feel “we are all Rasmea Odeh.” Perhaps Jezebel readers don’t mind this sweeping declaration of solidarity with a person who joined a terrorist organization and was convicted for her participation in a deadly bombing attack on a supermarket. After all, the bombed supermarket was in Jerusalem and the casualties – two students killed and nine people wounded – were Israeli Jews. But while most Americans will never have heard of Rasmea Odeh, many would probably be alarmed to know that a former member of a group that “pioneered aircraft hijackings” and that is listed as a terrorist organization by the United States, Canada, Australia, and the European Union, is so enthusiastically championed by a Palestinian American professor who teaches at a well-respected US university.
Of course, Erakat pretends that Rasmea Odeh is just an innocent victim of Israel’s brutality, forced after weeks of monstrous torture to confess to a crime she didn’t commit. Yet, Erakat is apparently aware that a thorough documentation showing that Odeh was convicted in a fair trial has been available at Legal Insurrection for more than two years – but naturally, she thinks it’s enough to denounce the site as just one of the “right-wing rags” that none of her readers would ever even look at.
Perhaps Professor Erakat will one day write a learned book on how to tell right-wing facts from left-wing facts, but in the meantime, the fact of the matter remains that it’s pretty easy to show how utterly hollow the claims of Odeh and her fans are. Particularly easy to refute is the claim that she only confessed after enduring “45 days” of heinous torture: Odeh was arrested by Israeli security forces on February 28, 1969; three days later, the Jewish Telegraphic Agency (JTA) reported:
“Jerusalem police said today that they had confessions from three suspects directly involved in planting bombs that wrecked the Supersol supermarket in West Jerusalem on Feb. 21, killing two Hebrew University students and injuring nine other persons. […] Police said the bombs were planted by two girls who received the explosives from a third saboteur. They were concealed in shopping bags. The crime has been reconstructed with the aid of the suspects, according to police.”
Moreover, as Erakat should know, Palestinians tend to be very proud of any terror attacks they committed – and sure enough, one of Odeh’s accomplices has repeatedly boasted about her own and Odeh’s role in the deadly bomb attack. You can watch Aisha Odeh doing just that here and here – and both interviews were meant to glorify what Rasmea and Aisha Odeh accomplished. (Incidentally, they are apparently not relatives).
So much for Rasmea Odeh’s “innocence”…
Of course, it can’t be ruled out that Noura Erakat would insist that Aisha Odeh and the programs that glorified her and Rasmea Odeh must be dismissed as part of some vast conspiracy orchestrated by “right-wing rags.” But “right-wing rags” really face a tough challenge: they can hardly hope to discredit the left more effectively than Erakat has done by asserting that being on the left means embracing a convicted terrorist who not only joined a group that pioneered airplane hijackings, but who also participated in the deadly bombing of a supermarket and then lied about it all to get US citizenship.
Given Erakat’s views on Odeh, it is hardly surprising that she is also an ardent admirer of Richard Falk, an antisemitic 9/11 truther whose support for the terror group Hamas has even upset the Palestinian Authority. But Professor Erakat is “honored” to call Falk “a friend” and she’s “so inspired, when not intimated, floored” by how much Falk gives the world… 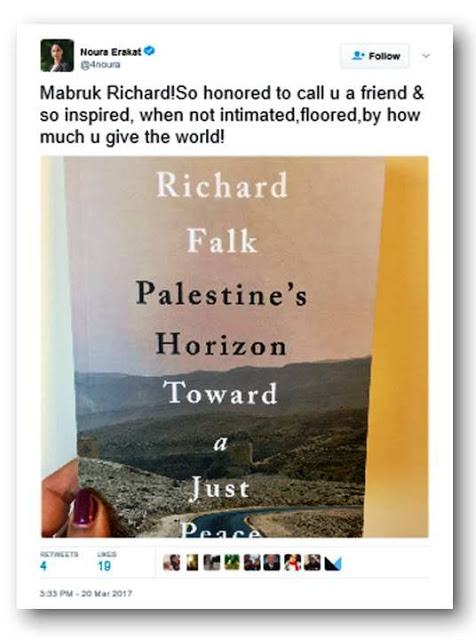 Thanks to a tip I received on Twitter, it is also clear that as far as Erakat is concerned, Palestinian terrorism – no matter how gruesome – will never diminish her support for the Palestinian “cause”. An article in The Daily Californian from early April 2002 tells us that at a raucous “pro-Palestinian” rally,
“UC Berkeley senior Noura Erakat, praised the Palestinian people on being ‘steadfast in their refusal to leave’ Palestine, and drew wild cheers from the mostly pro-Palestinian crowd when she accused Israel of ‘racist, apartheid practices.’”
This statement from Erakat came at the height of the so-called Al-Aqsa Intifada that Palestinians initiated after they had been offered a state comprising all of Gaza and at least 90% of the West Bank at Camp David in July 2000. Here is just a partial list of some of the major Palestinian terror attacks in the three months preceding the “pro-Palestinian” rally in Berkeley:
In the Bat Mitzvah massacre on January 17, 2002, 6 people were killed and 33 were wounded at a Bat Mitzvah celebration in Hadera.
In the Jaffa Street bombing on January 27, 2002, Wafa Idris, “a 28-year-old female Palestinian suicide bomber, blew herself up in the center of Jerusalem, killing one person and injuring about 100 others.”
In the Karnei Shomron Mall suicide bombing on February 16, 2002, 3 teenagers were killed and 27 people were wounded.
In the Yeshivat Beit Yisrael massacre in downtown Jerusalem on March 2, 2002, 11 Israelis – including “two infants, three children and two teenagers” – were killed and over 50 people were injured by a suicide bomber who “detonated the bomb full of shrapnel alongside a group of women with their baby strollers, waiting for the services in a nearby synagogue to conclude.”
In the Café Moment bombing on March 9, 2002, 11 Israelis were killed and 54 wounded by a Palestinian suicide bomber targeting a popular café in Jerusalem.
In the King George Street bombing on March 21, 2002 in Jerusalem, 3 Israelis were killed – including a woman pregnant with twins – and more than 40 people were wounded by a suicide bomber.
In the Passover massacre at the Park Hotel in Netanya on March 27, 2002, 30 people were killed and 140 were injured when a suicide bomber targeted a Passover seder.
In the Kiryat HaYovel supermarket bombing on March 29, 2002, “a 16-year-old Palestinian female suicide bomber blew herself up at the entrance of the main supermarket in the Jerusalem neighborhood of Kiryat HaYovel, killing three people and injuring 28.”
In the Matza restaurant suicide bombing on March 31, 2002, 16 Israelis were killed and over 40 were wounded.
Since Noura Erakat wholeheartedly cheered the Palestinian “cause” in April 2002, it’s perhaps not surprising that she is openly embracing a convicted Palestinian terrorist some 15 years later. But given that Rasmea Odeh was a member of the Popular Front for the Liberation of Palestine (PFLP) at the time when the terror group “pioneered” the hijacking of airplanes, we should also recall that the Berkeley rally at which Noura Erekat “drew wild cheers” took place just half a year after the September 11 attacks on the US. While we can’t know if PFLP members like Rasmea Odeh felt particular pride that their organization had provided something of a precedent for the 9/11 attacks, we do know for certain that Palestinians in general were ardent admirers of Al Qaeda leader Osama bin Laden: according to reliable polls first published in 2003, “72 percent of Palestinians voiced support for bin Laden;” and even almost a decade later, a poll conducted shortly before the demise of bin Laden showed that a solid third of Palestinians continued to have “confidence in the terrorist leader to do the right thing in world affairs.”
In this context it is utterly fascinating to see that Erakat opened her lengthy piece in Jezebel actually with a quote from a recent speech by Rasmea Odeh, starting with a reference to the 9/11 attacks on the US – and it’s all too obvious that Odeh couldn’t care less how most Americans felt in the wake of the attacks, because when she talks about “target[ing] our people,” the people she refers to are whatever people feel targeted by “Israeli and U.S. policies”:
“‘In the US, we are living in a time that is worse than the few years after the September 11th attacks,’ said Rasmea Odeh to nearly 1,000 people gathered at the Chicago Teachers Union Hall to commemorate International Women’s Day on March 8. ‘Israeli and U.S. policies make it easy to target our people,’ she continued, ‘but Palestinians are resisting these attacks in Palestine, and here in the U.S., we are all resisting Trump’s attacks on immigrants, Black people, Arabs and Muslims, and others.’ The audience responded with a standing ovation.”
I’d say that the audience responded a bit like turkeys cheering Thanksgiving. But in any case, we should probably all be happy for Odeh, who won’t have to live much longer in the US at this terrible time “that is worse than the few years after the September 11th attacks.”