Here are two interesting viewpoints on the Basic Law: Israel as the Nation-State of the Jewish People, from non-Jewish Israelis.

One is from a Maronite Christian who lives in Israel, in an article translated from Israel Hayom:

The modern State of Lebanon was established by Maronite Christians, as a shelter for them and other persecuted Christian communities in the Middle East. The goal of the founders of the State of Lebanon, experienced with persecution and genocide, was to protect and cultivate, in their own state, their language, Aramaic, and their unique Phoenician-Aramaic culture. The Muslim population of Lebanon was not a partner to this national vision, and due to differences of opinion, the Maronites were compelled to abandon their national ambitions. With no other choice, they agreed to the establishment of a state of all its citizens that, to their chagrin, joined the Arab League.

Unfortunately, not only did this solution not bring peace and calm, but it created tensions among the major national and ethnic groups within Lebanon until the situation finally deteriorated into bloody war. The Muslims did not at all see themselves as part of an independent Lebanese country and instead they nurtured their dream of uniting with their brothers while cooperating with the Arabs in the surrounding region.

These processes brought about increased extremism in the Muslim Arab population in Lebanon, weakening state institutions and causing many Christians to emigrate from the land of their forefathers in which they had thrived for generations. Furthermore, the religious-national tensions in Lebanon created discord among the Christian communities, themselves, that until the 1950s had comprised the majority of the population and today — after innumerous wars and tragedies – they have become a persecuted minority in their own country: from 80% in the 1930s Christians now make up only 35% of the contemporary Lebanese population.

What is the lesson to be learned from Lebanese history with respect to the National Law in Israel? As an Israeli Maronite Aramaic Christian, belonging to the minority and enjoying freedom in Israel, I actually understand the importance of this Law. Yes, our forefathers supported, for ideological reasons, the realization of the Jewish nation in the Land of Israel. But my support of the National Law arises as well from the bitter Lebanese experience: I believe that Jewish Nationalism declared by Israeli law in fact guarantees that she will continue to be a democracy, and it also promises me that I will remain secure as a member of a religious minority.

Experience teaches us that the Jewish majority in Israel appreciates democracy and is faithful to its principles. A state of all its citizens (meaning: a state of all its national groups), on the other hand, is liable to duplicate the Lebanese tragedy here in Israel. Recent history proves that there is good reason to suspect that without the fortification in law of Jewish nationality, national and religious tensions would grow and intensify. Supported by elements outside the country, the Arab Muslims of Israel would seek to join with their Palestinian brothers, and after that to unite with the larger Arab world around us.

It must be emphasized that the Jewish state is based upon the Jews as a People and not on religious law. Therefore, Israel is very different from religious states such as the Islamic Republics that are governed according to Sharia Law. For Jews there is the right of national self-determination, just like the United Kingdom, Poland or Ireland. The National Law is new, but its essence is ancient: it is the culmination of both historical ambition and contemporary reality; this Basic Law, together with earlier Basic Laws promise to maintain the democratic nature of Israel.

In contrast with those opposing the law, I also believe that emphasizing Jewish nationality will promote the Two State Solution, because this law focuses on the value of nationality – and not only religion – in the identity of a state. This is an important basis upon which to build civic stability, standing firm against all the elements negating the Jewishness of the state – both within Israel and without.

In addition, I am hopeful that in the state of the Jewish People, that our forefathers supported, there will be a way for self-expression for loyal minorities like us, who mostly prefer to live and integrate within her. And at the same time, I anticipate that a way will be found to maintain, within Israel, our own identity, culture, and Aramaic language. In contrast with many Palestinians, we seek to accomplish this peacefully and in brotherhood alongside the Jewish majority and not instead of it. Your brothers, the Maronite-Arameans in Kfar Baram await the fulfillment of the just promise of the State of Israel, and I am convinced that now that the nationality of the Jewish People is codified in a Basic Law, the conditions will ripen for the establishment of a settlement for my own community. 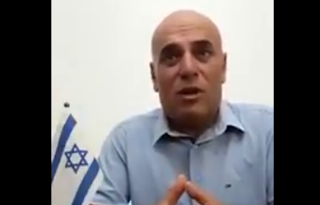 And a Druze Zionist has his own reasons to support the law, even though many Druze have expressed misgivings about it:

I turn from here to my Druze brothers and to all of Israel. In recent days, we have witnessed the evil attempt of the leftist organizations and the New Israel Fund, which are trying to drive a wedge in the important alliance between the Druze citizens of Israel and our Jewish brethren. A covenant that dates back to the days of Jethro, our prophet and Moses. There is no Druze in the world who can claim a better and freer life than the Druze citizens of Israel. I ask all my Druze brothers not to fall into this trap of fools and to support the law of the nation as it is. The law does not deprive us in the least, and preserves Israel as the nation-state of the Jewish people. It is in our clear interest. Because the left is hungry for power, which aspires to destroy the Jewish state and turn it into a state of all its citizens and residents, we are not counted today, nor will we count in the future. They will use us and throw us away.
I am Aata Farhat, head of the Druze Zionist Council, an Israeli Druze and a proud supporter of the law.

Both of these non-Jews intuit the truth: the law is the way to preserve democracy, not to destroy it. Because without Israel being a Jewish state then it is on the slippery slope to eventually become yet another failed Arab state, something that is the unstated goal of many of the law’s opponents.