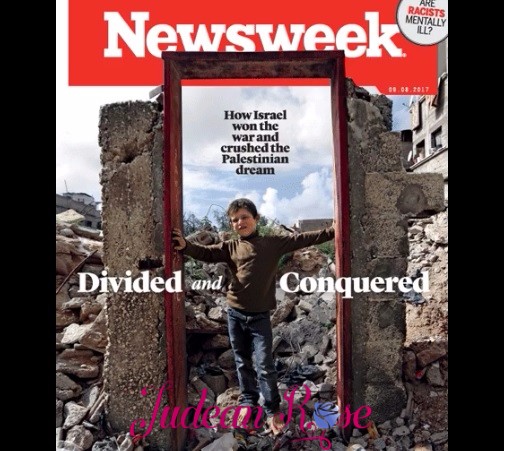 “Has Israel finally won the war and defeated the Palestinian dream? Read our cover story,” said the tweet with a gif of an Arab child in an empty doorframe looking like Jesus on the cross, who, after all, the Arabs claim as a native son.

I looked to see who dared to intimate that Israel’s entire reason for being is to quash Arab dreams. I thought some alt right or neo Nazi group perhaps. Someone who thinks the Rothchilds sit at some never-ending mahogany table, smoking cigars and directing the world to implode.
But no. It was Newsweek. The magazine that used to be our window on the world as we sat in the dentist’s office, waiting our turn for the drill. It’s the magazine a high school adviser told my sister to read with a dictionary by her side. “Look up every word you don’t know. You’ll ace the verbal half of the SATs,” she said.
Back then, it was a reputable magazine. Now, apparently, it’s dreck.
The articlewas long. Too long to unpack and keep you with me. But brevity is impossible when faced with so much bias and so many lies.
Let’s begin with who “won the war.” 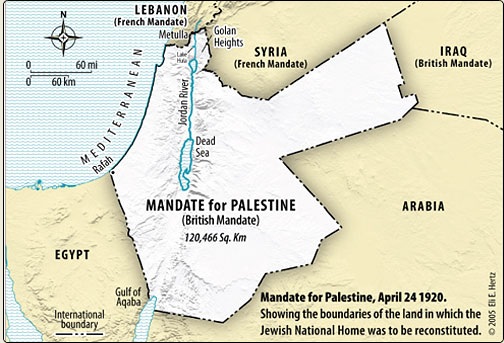 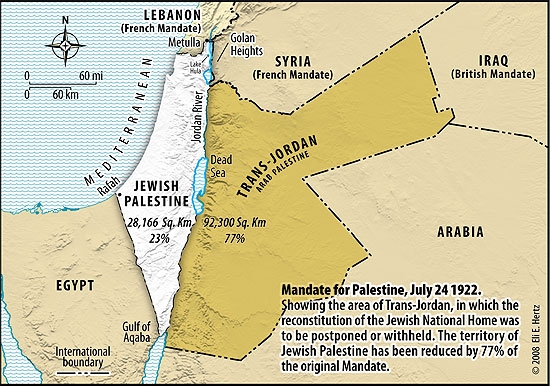 So who won that war?
The Arabs.
They won that war by cajoling the Brits into giving them 78% of the land formerly promised to the Jews. Unless my math fails me, that leaves the Jews with only 22% of the land they’d originally been promised. Land they can prove is their indigenousterritory.
So the Jews lost that war. And then lost another when the UN put forward the Partition Plan, which would leave the Jews even less territory—territory now indefensible—to give the Arabs yet more of the territory promised to the Jews. Land that is indigenous Jewish territory. Land we shouldn’t have to beg to have. Because it’s ours by inheritance, by right.

But we gave in, being graceful losers, and acceded to Partition. The Arabs, of course, knew they could get more by never giving in, so they attacked Israel. With 7 armies. (It wasn’t enough to get 78% of the land. It wasn’t enough to get more Jewish land from the Partition Plan. They wanted the Jews OUT. They wanted them gone.)
Jordan occupied Judea and Samaria during the fighting, in contravention of international law, vis a vis the UN vote on Partition. So who won that war? The Jews who share the name of their people with the name of the Jordanian-occupied territory known as “Judea?”

Israel won some of its land back in the miraculous Six-Day War in 1967. Quashing Arab dreams was the last thing on Israel’s collective mind, at the time. It was an existential battle, a fight to live, to exist.
And let us be clear: Israel has always wanted to live in peace with its Arab neighbor. Always. If you walk through an Israeli hospital you know this, by seeing Arab patients treated with equality and kindness. If you go shopping, you see Arabs examining clothing items alongside Jews. Arabs sit beside Jews on buses and Israeli trains. It is everywhere in Israel this way.
Not so in any Arab country. They don’t let Jews put a toe inside their countries.
Who won this war?

The Arabs. They have equality in Israel. Israeli Arabs can travel in every part of Jerusalem.
What about the Arabs of Judea and Samaria? Aren’t they under “occupation?”
Not at all. They have autonomy: their own government, their own elected officials. And their villages are completely Judenrein.
So who won that war?
The Arabs, of course.

In Gaza? Israel expelled 11,000 Jews to make Disengagement happen. Israel gave the Arabs yet another Arab state (in addition to Jordan and Area A of Judea and Samaria). Israel left them greenhouses worth a whole lot of money. The Arabs destroyed them.
The Arabs won big time. Quashing dreams? That would be the dreams of Israeli settlers who were expelled from their beautiful homes, who lost access to their businesses, and who were utterly betrayed by their own people. For what? Missiles raining down like Hurricane Harvey.
So much for the premise of the Newsweek piece. Jews winning? Ha! Jews wanting to quash Arab dreams? Sure. That’s why we agreed to Partition. It’s why we expelled 11,000 of our own people from their homes. Pshaw.
But let’s look at the article itself which begins with a clip that is supposed to summarize the recent violence that erupted over the Temple Mount, but fails to note the event that was the catalyst for the added security measures and subsequent protests. Those measures that included installing metal detectors at entrances to the Temple Mount compound. As the clip begins we see Arabs rioting. There’s a caption:

Nothing about the terror attack in which Arabs shot and murdered two Israeli policemen.
But we are told how Israeli policemen shot stun grenades into the crowd of rioting Arabs. This is supposed to sound really inhumane. Still nothing about the terrorists who shot and killed policemen, though.
The viewer is informed that metal detectors were placed at the entrance to the Al Aqsa Mosque, which is not true. The metal detectors were placed at the entrances to the Temple Mount compound, a large area which includes the mosque. The viewer is not told that the terrorists stashed weapons in the mosque, having smuggled them into the compound. This is why the metal detectors were deemed necessary: to prevent further loss of life after Arab terrorists murdered two policemen.
Next we are told how awful it is in Gaza, with no electricity.

“This summer’s power crisis is merely the latest in a long list of shortages of everything from drinking water and cooking gas to cement and cars. But this time, one thing is different: The problem has been created by other Palestinians.”

Um, no. Actually, all of these shortages and difficulties are due to their own Arab people. The world is just POURING money into Gaza, into Hamas and PA coffers, and the people see no benefit. Except for terrorists and their families, who get nice salaries. And government people with their hands in the till. NONE of this is on Israel. All this Arab woe is 100% Arab-made.
In spite of this, Newsweek obtains a juicy quote from a Gaza resident: “I never thought the one making my life difficult would be another Palestinian.”
Riiiiiiiiiiiiiight.
I read the caption of a photo:

“Though Israel’s status as a Jewish and democratic state in the very long term is still imperiled, five decades after the occupation began, the Palestinian national movement has been largely defeated.”

Oh, yeah. Someone is always threatening us that if we don’t “end the occupation” Israel will cease to be a democratic state. But the only occupation is the Arab occupation of Jewish land. I mean, they don’t like it here, let them leave. We absorbed all the 850,000 Jews they expelled from their 22 Arab states, couldn’t they absorb their own, too?
This is all a self-created problem. Democracy is not at all threatened by Arabs refusing to leave Israel, trust me. It is also not threatened by them wanting more territory and not getting it.

“The Palestinians, living under occupation or scattered across the diaspora, have long been the weaker party in the conflict with Israel.”

“The climax came in the late 1980s, with the start of the first intifada, a homegrown movement of mass protests. Israel responded with brute force, killing and wounding thousands of demonstrators—what then–Defense Minister Yitzhak Rabin called its ‘broken bones’ policy.”

Mass protests? Is that what you call the more than 3,600 Molotov cocktail attacks, 100 hand grenade attacks and 600 assaults with guns or explosives by Arabs against Israelis that made zero distinction between civilians and soldiers? Is that what you call the Arabs stabbed, hacked with axes, shot, clubbed and burned with acid during this time by Yasser Arafat’s henchmen? (Their crime? Sometimes they were employees of the Israeli Civil Administration of Judea and Samaria. Or maybe a guy talked to a Jew and someone saw.)

“Optimism soon collided with the second intifada, a grisly campaign of suicide bombings that silenced the peace camp in Israel. From there, the Palestinian strategy diverged. Hamas fought three wars. Young Palestinians carried out hundreds of lone wolf attacks in the West Bank, East Jerusalem and Israel. The PA, meanwhile, waged a diplomatic battle against Israel, joining the International Criminal Court and winning recognition from the United Nations and a number of European states.

“Yet none of these moves forced Israel to make concessions.”

Israel made no concessions?