This video was going around social media. Note the tweet:

WATCH: Cowardly #Israeli #Jewish colonists attacking a poor old #Palestinian woman crossing a street with stones & plastic chairs after a failed attempt to run her over with a car.
Later on, they beat her up badly just because she was a #Palestinian.pic.twitter.com/LSNegCQ4Wj

Someone asked me to look at it, and it was immediately apparent to me that the woman had a knife – she is chasing a man at the start of the video and she is later seen with her arm up in a stabbing position in case anyone comes near. That would explain why someone was trying to chase her with a chair, to keep out of arm’s length, and why someone tried to stop her with his car.
A little research and I found the story, from 2016,  with another angle of the video showing the woman (who is not old at all)  trying to stab multiple people in the street while they throw things at her to keep her at bay: 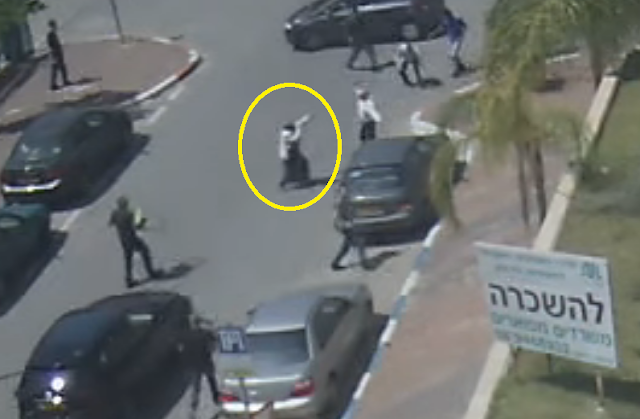 A female Arab terrorist on Sunday tried to stab civilians and succeeded in wounding one victim in the coastal city of Rosh Ha’ayin, located southeast of Tel Aviv, before being neutralized. The stabbing has yet to be officially classified as a terror attack.

The incident took place on Hamalakha Street in the city, where a female Arab suspect with two knives was arrested.

She had tried to stab passersby and lightly wounded one woman aged around 30. The victim was fully conscious and received treatment from Magen David Adom (MDA) medical teams.

Video from security cameras at the site show how civilians rushed to try and apprehend the Arab woman and prevent her from continuing to stab, and one driver tried to knock her over with his car to stop her. Witnesses report she shouted: “I’ll kill you!”

According to the police, a security guard in the city’s industrial region overpowered her, knocking the knife from her hand without opening fire. She had another knife in her bag.

Police noted that the stabber is being investigated to understand her motives.

Yet the anti-Israel lie kept getting far more retweets even after I exposed the truth than beforehand!

Anyone who has the slightest actual knowledge about Israel knows that 20% of Israelis are Arabs. The idea that Israeli Jews chase random Arab women for no reason is ludicrous. Yet that is what is easily believed by 2000 people so far, from a Twitter user who is not even very popular.

This is modern antisemitism in action – people willing to believe the most absurd lies about Israeli Jews without the least bit of critical thinking, swallowing lies that take seconds to debunk.