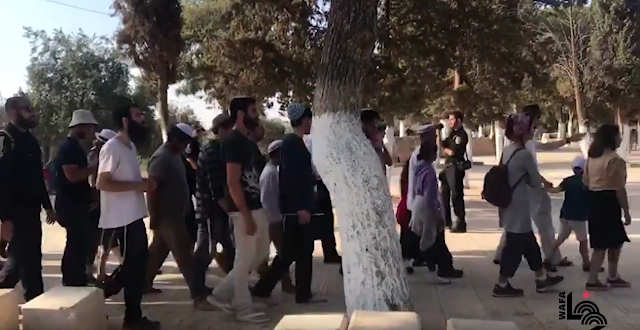 On Sunday, over 1000 Jews visited the site of the Holy Temples on the Temple Mount in Jerusalem to commemorate the anniversary of their destruction.

9 of them were detained by police for the unpardonable crime of praying or bowing.

Here’s Arab video of the Jews peacefully strolling on the Mount, as well as praying outside of it.

This is of course too much for darlings of the liberal West.

Not only did Hamas and Islamic Jihad condemn these visits, but the Kingdom of Jordan issued a formal diplomatic complaint against allowing Jews to exercise freedom of religion.

The Jordanian embassy in Tel Aviv presented a diplomatic protest note to the Israeli Foreign Ministry thison Sunday morning “expressing the Kingdom’s strong condemnation of these violations and demanded an immediate halt,” the Jordanian minister of information, Jumana Ghneimat, said in a statement.

Ghunaim condemned what she described as the “continuous Israeli violations and provocations against the Al-Aqsa Mosque, especially the provocative incursions of extremists and settlers that took place today in large numbers on the sanctuaries of the Al Aqsa compound under the protection of the Israeli police. Such condemnatory and reprehensible practices, which are protected by the Israeli police, violate the sanctity of this holy place and provoke the feelings of worshipers and Muslims all over the world.”

She added, “This is a violation of all international conventions that emphasize the need to respect places of worship for all religions,” she said.

The irony of banning Jews under the pretext of respecting religion is apparently lost on the Muslim world and its Western supporters.