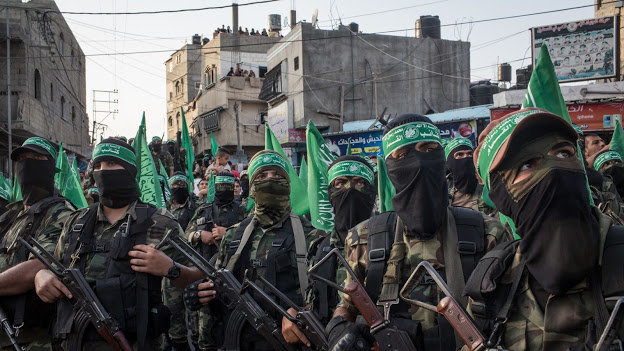 The Justice Department on Friday charged two American citizens with ties to a far-right extremist group with trying to support the Palestinian terrorist group Hamas — a case that shows that extremists have sought to turn protests against racism into opportunities to commit violence, but that also runs counter to President Trump’s assertions that those extremists are predominantly on the far left.
Michael R. Solomon, 30, and Benjamin R. Teeter, 22, who were taken into custody on Thursday evening in Minneapolis, say they are members of a group called the Boogaloo Bois and of a subgroup called the Boojahideen. The groups are part of a loosely connected movement that seeks to bring about a second civil war to overthrow the United States government.
John C. Demers, the head of the Justice Department’s National Security Division, said in a statement that Mr. Solomon and Mr. Teeter met with people they believed to be members of Hamas in order to “join forces and provide support, including in the form of weapons accessories,” to the terrorist organization.

When the NYT wants to associate Hamas with a right wing American group, Hamas magically transforms into a terrorist organization!
This is a remarkable example of media bias. The mainstream media goes through lots of apologetics when writing about Hamas or Islamic Jihad or Hezbollah, careful not to describe those groups as terror organizations because “one man’s terrorist is another man’s freedom fighter.” ISIS is described as terrorist on multiple occasions in the NYT but not groups that only target Israeli civilians.
However, a tenuous connection between a fringe right-wing group and people they thought were Hamas is enough for the New York Times to change their style book from a progressive-friendly Hamas militant group that shares the same goals as BDS to a right-wing linked terror group.
The real story, ignored by the NYT, is that antisemitism is the glue that holds extremist groups together, whether Right, Left, Black, Arab or otherwise. White supremacist groups will happily quote left-wing anti-Zionists. In this case, the Boogaloo Bois were attracted to Hamas’ antisemitism in wanting to partner with them.
In fact, the Boogaloo groups started off sounding as much like today’s progressive extremists as they sound like white supremacists. According to the ADL, the groups associated with that name are anti-government and even anti-police. “Boogaloo” refers to a coming civil war, which is not far off what we are seeing in far-Left protests. A song lyric from the group quotes by the ADL says “Plug a pig, and then a Yid” – which makes them sound as much like Black Lives Matter as they sound like the KKK. Hate does not fit in neatly in Right/Left categories, and journalists who insist on categorizing them that way are doing a disservice to their readers.
(h/t FirstOneThrough)