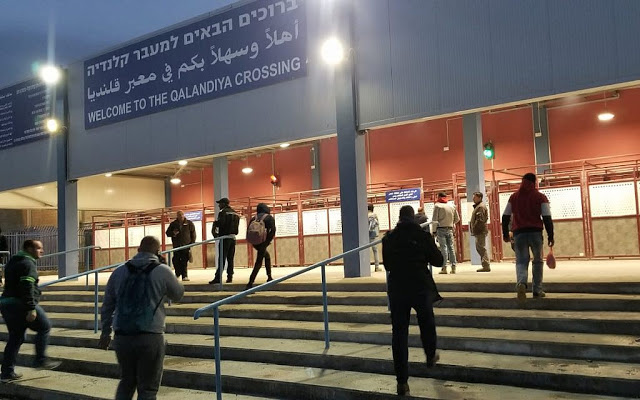 After years of operating a woefully inadequate and inefficient pedestrian checkpoint in Qalandiya that often left Palestinian laborers from the central West Bank waiting in extremely long lines, Israel finally inaugurated a new checkpoint in the area in late February.

Inside the checkpoint, groups of laborers formed orderly lines and patiently waited their turn to pass through metal detectors and automatic gates that verify their entry permits (all Palestinian workers in Israel have biometric permits) as IDF soldiers and private security guards observed them from a distance.

Within five to ten minutes, they exited the checkpoint and started to search for the vans and buses waiting to transport them to their workplaces.

The checkpoint is located at the southern end of Kafr Aqab, Jerusalem’s northernmost neighborhood, which abuts the West Bank security barrier and has suffered from years of poor municipal services. The estimated 60,000 Kafr Aqab residents, many of whom are permanent residents of Israel, and other Palestinians in the central West Bank must cross through Qalandiya or another checkpoint to reach the center of Jerusalem.

The laborers, who have various jobs throughout Israel, overwhelmingly said the new checkpoint has made their morning commute to work significantly more manageable compared to the old one.

“It is substantially better,” said 43-year-old Yousef Jabareen, who works as a butcher in Jerusalem’s Mahane Yehuda market, while standing at Qalandiya’s exit. “It used to take about an hour to pass through the old one. Now it only takes a few minutes, which means that I get about an extra hour of sleep.”

So everyone should be happy that an overcrowded checkpoint has been replaced with something that takes less time to pass through than a trip through New York’s Port Authority terminal?


Azzam al-Ahmad, a senior Fatah and Palestine Liberation Organization official, said that Israel “should not be working to beautify checkpoints, but rather to remove them and end its occupation.”

“We are a people that wants its dignity and they only way we can achieve that is ending the occupation and establishing an independent state along 1967 lines with East Jerusalem as it capital,” Ahmad said in a phone call.

If the PLO wants a two state solution, then wouldn’t there be checkpoints between the states anyway?

Machsom Watch, the NGO that monitors the checkpoints, grudgingly admits that the new checkpoint is  much, much better – which, to them, makes it worse. They used to bring reporters to the chaotic, overcrowded and dirty checkpoint there, and now it looks better than most airports:

The new terminal  is well lit, there is no crowding  such as we used to see, people one on top of another,  and it really does move quickly and efficiently . But I think of the times that we have brought people to see the horror of the situation there and also the photographers. When such people  now come to Qalandiya how many of them will be aware what is going on behind this civilized scene. The West Bank, Hebron,  The violence of the settlers, the soldiers who support them and give them a free hand, the nightly invasion of houses, children even under the age of 12  who arrested, the trees that are cut down, the schools which are destroyed, the demolition of houses. And I ask myself ….. Will Qalandiya be the whitewashing of the occupation.