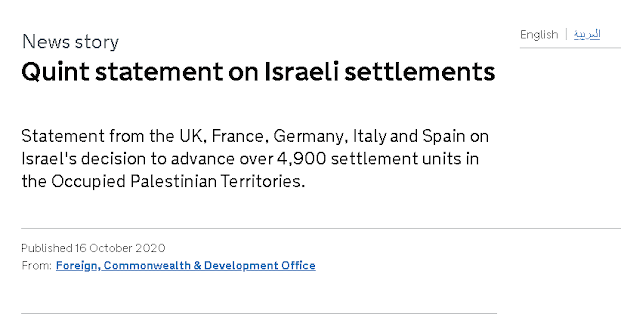 Statement from the governments of the UK, France, Germany, Italy and Spain:
We are deeply concerned by the decision taken by the Israeli authorities to advance more than 4,900 settlement building units in the occupied West Bank.
The expansion of settlements violates international law and further imperils the viability of a two-state solution to bring about a just and lasting peace to the Israeli-Palestinian conflict. It is also a counterproductive move in light of the positive developments of normalisation agreements reached between Israel, the United Arab Emirates and Bahrain. As we have emphasised directly with the Government of Israel, this step also undermines efforts to rebuild trust between the parties with a view to resuming dialogue.
We therefore call for an immediate halt to settlement construction, as well as to evictions and to demolitions of Palestinian structures in East-Jerusalem and the West Bank.
We call for the full implementation of UN Security Council resolution 2334 with all its provisions. We emphasise that we will not recognise any changes to the 4 June 1967 lines, including with regards to Jerusalem, unless agreed to between the parties. The suspension of plans to annex parts of Occupied Palestinian Territories must become permanent. We call on both sides to refrain from any unilateral action and resume a credible dialogue, as well as direct negotiations on all final-status issues.

It turns out that the Quint is a new group.
As the Jerusalem Post notes, the group exists because the EU cannot agree on a unified Middle East policy, so the large Western European nations want to keep their pretense of influence in the region.
And this is not the first statement by the group:

Last Friday was not the first time the Quint made an appearance. That distinction apparently came last year in September, when the five European countries issued a statement expressing “deep concern” at Netanyahu’s announcement just prior to that month’s elections of his intention to annex the Jordan Valley.

So the group has made two statements, both against Israel.
No stand-alone statements in favor the the Abraham Accords.
Apparently, that is the only purpose of this group.
Because the world needs another forum to condemn Jews living in their historic heartland.
Isn’t that special.
(h/t Irene)