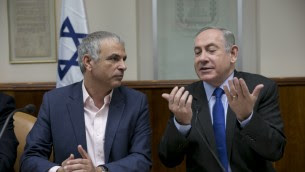 Libyan-born Moshe Kahlon with Benjamin Netanyahu
Prime Minister Benjamin Netanyahu apologized on Friday following an uproar over comments he made deemed offensive to Jews of Middle Eastern extraction, the Times of Israel reports. Vociferous among his critics were several MKs including Moroccan-born Amir Peretz. But Miri Regev, the culture minister, who has, in the past, been swift to condemn similar anti-Mizrahi remarks, was notably silent. (With thanks: Lily)
During a meeting of coalition party leaders on Thursday, Netanyahu was asked by Finance Minister Moshe Kahlon — who is of Libyan decent — why he called for a six-month delay of the scheduled April opening of the new public broadcaster, to which the prime minister responded “my Mizrahi gene acted up,” seemingly attributing his rash decision to this stereotype.
Mizrahi is a Hebrew word meaning “eastern” and is used to refer to Jews whose families came from the Middle East and North African, as opposed to Ashkenazi Jews of European descent.
Read article in full