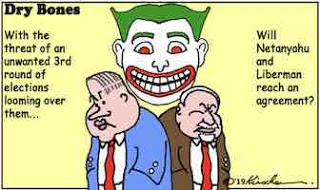 Prime Minister Netanyahu and Yisrael Beiteinu leader Avigdor Liberman have finally met – albeit for just one hour – to discuss the possibility of the 63 votes they controlbeing converted into Israel’s next Government.

The direct cost to the Israeli government for new elections, including a budget for the central elections committee and state funding for parties running in the elections, is estimated at NIS 800 million ($220 million).

The greatest loss, however, arises due to the fact that election day is an official vacation day in Israel. The country’s daily GDP is approximately NIS 5 billion ($1.4 billion). Accordingto conservative estimates, election day represents a loss to the Israeli economy of some NIS 1.5 billion ($410 million).

Liberman has publicly laid out his demands for joining the Right-Wing bloc headed by Netanyahu:

• re-approving egalitarian prayer at the Western Wall;•requiring ultra-orthodox schools to teach secular subjects•public transportation and the opening of mini-marketson the Sabbath.

These two issues would be left up to local authorities in every municipality, based on who lives in any given town.


“We won’t accept anything less than this, even if it means sitting in the opposition.”

Liberman has to adopt a more flexible approach and accept less than the ”all or nothing “ stance he has adopted. Netanyahu is now in a much stronger position politically to accept Liberman’s major demand for passage of Liberman’s ultra-orthodox military service draft law – which was the deal-breaker in April.

Liberman voters increased by136684 in September whilst religious parties only increased their votes by 91188 and Likud’s vote decreased by 28835.

Civil marriage and conversions by local rabbis is a curly problem that could be sent to a Committee to consider and come up with recommendations.

Re-approving the Western Wall arrangements should be a formality.

Teaching secular subjects in ultra-orthodox schools could begin with pilot projects in specified schools in particular areas where the ultra-orthodox community do not constitute the majority of the population – perhaps with majority parental approval.

Liberman’s proposals for transport and mini markets on Shabbat happen in many areas now.

There is a pathway t oagreement on these issues that can be achieved with goodwill and a readiness to compromise in recognition of a greater objective – sparing the Israeli electorate anothe relection and the possibility that another deadlock could result.

Israel is surrounded by enemies–especially Iran, Hezbollah in Lebanon and  Syria and Hamas in Gaza that could be tempted to exploit the fractured nature of Israel’s current political circumstances.

There are pressing political issues awaiting Israel’s next Government –most notably negotiations on President Trump’s deal of the century and Netanyahu’s election promise to annex large parts of the West Bank.

Ending this state of suspended uncertainty has now been thrust on the shoulders of Netanyahu and Liberman – following the failure of Netanyahu and Blue and White leader Benny Gantz to achieve a deal they could both live with.

Netanyahu and Liberman would do well to heed the sage advice contained in the Ethics of the Fathers:


“Do not seek greatness for yourself, and do not lust for honor”

Achieving greatness and honor togetherby compromising their political expectations will secure Netanyahu and Liberman a special place in the annals of Israel.

Author’s  note:  The  cartoon—commissioned  exclusively  for  this  article—is  by  Yaakov Kirschen aka “Dry Bones” —one of Israel’s foremost political and social commentators—whosecartoons have graced the columns of Israeli and international media publications for decades. His cartoons can be viewed at Drybonesblog