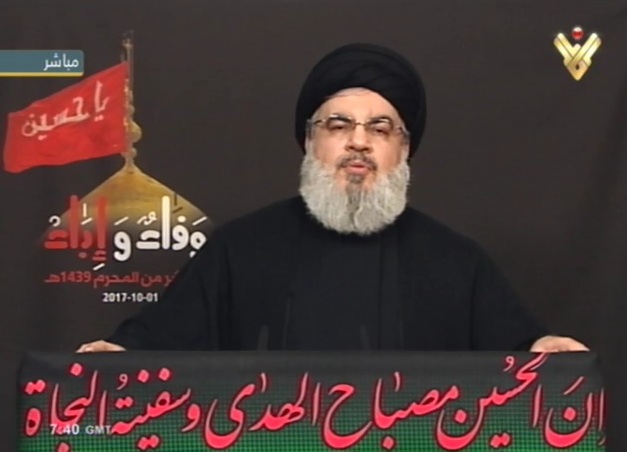 Hezbollah Secretary General Sayyed Hasan Nasrallah on Sunday called on the Zionist settlers, especially the Jews, to leave the occupied Palestinian territories into the countries from where they had come, adding that if the US-Israeli command decides to launch a war on Lebanon and other regional countries, they would have neither enough time to escape nor a safe place in Palestine to resort to.

During Hezbollah crowded ceremony held in Beirut’s Dahiyeh to mark Ashura anniversary, Sayyed Nasrallah said that the stupid Israeli command does not have accurate data about the military capabilities that will confront the Zionist army during any upcoming war.

The Israeli political and military leadership does not have a clear view about the battlefields, the participators, and the horizon of the war, according to Sayyed Nasrallah who added that the enemy PM Benjamin Netanyahu in cooperation with the US President Donald Trump is planning to launch a war against Lebanon, Syria and Gaza.

“If this war happens, the Zionist settlers will pay a heavy price, and the entity will reach its demise.”

Do not let your command, which lies to you when it exaggerates its ability to emerge victorious from any war, involve you in a war which may cause your end, Sayyed Nasrallah warned the Israeli settlers.

Sayyed Nasrallah added that the Jews have been used by Zionism to fuel its imperial policies which serve the US-UK interests in the region, stressing that Hezbollah’s war is against the Zionists, not the Jews as followers of a divine religion.

“I call on non-Zionist Jews to leave occupied Palestine to the countries they came from so that they don’t be the fuel of the next war, seeing as they might not have enough time to leave,” Nasrallah added.

A few points for those who don’t follow Hezbollah closely.

When Nasrallah says “settlers” he means all Jews in Israel.

When he says “occupied territories” he means all of Israel.

He is saying that Jews should leave to save their lives in the next war – but strangely he doesn’t call for 2 million Arabs to leave. Meaning that either he wants to see them killed or he’s blustering.

Since he is so interested in having people go back to their countries of origin, perhaps it is time for Nasrallah – who claims to be a direct descendant of Mohammed through his daughter (that’s what Sayyed means) – to return to the areas where Mohammed lived.

Because Mohammed sure never lived in Israel. And the Jews sure did.