A recent EoZpostquoted an interesting articlefrom the current issue of the Middle East Quarterly (MEQ) that explores the question how the Western Wall came to be seen (mistakenly) as Judaism’s holiest site. But the MEQ article includes a regrettable error, which remains uncorrected at the time of this writing, even though I contacted the publication already a week ago and pointed it out.
As you can see from the screenshot below, one paragraph of the article cites a British report from 1930 that explains that after the destruction of the Second Temple by the Romans, “the Jews wailing-place at that time seems to have been the stone on Mount Moriah where the Mosque of Omar [in the Christian Quarter] now stands.” 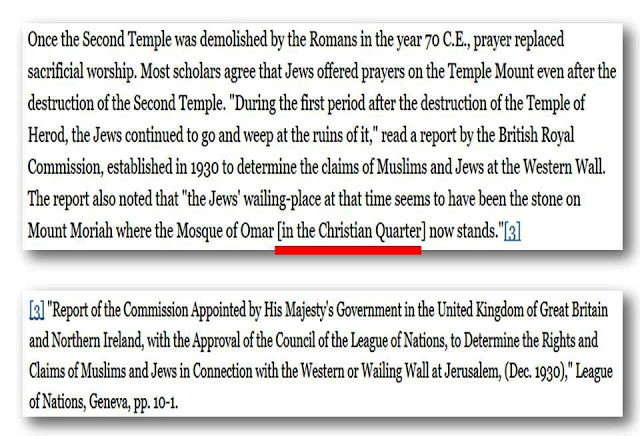 Quite obviously, the insertion in square brackets – i.e. “in the Christian Quarter” – makes no sense whatsoever, since “the stone on Mount Moriah” can only refer to the rock that is now covered by the Dome of the Rock.
If you check the original British report, you will see that the quoted sentence (from part III. HISTORY) does not have this misleading insertion. Moreover, shortly before the quoted passage, the British report features a “DESCRIPTION OF THE WAILING WALL AND ITS ENVIRONS” that states very clearly that the destroyed Jewish temples have been “supplanted by Moslem Mosques,” naming one of the mosques as the Al-Aqsa Mosque and the other as “the Dome of the Rock (in Arabic, Qubet Al Sakhra), or, as it is usually called, the Mosque of Omar,” which “is situated in the middle of the Harem area.” 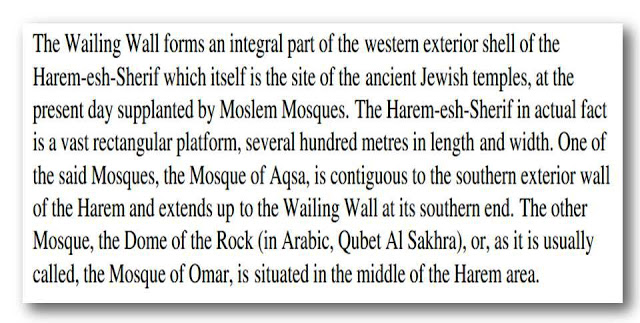 Indeed, if you google “Dome of the Rock Mosque of Omar”, you will find plenty of old images that show the Dome of the Rock, but refer to it as “Mosque of Omar” (e.g. hereand here); there are also several websites that note the fact that the Dome of the Rock is often mistakenlycalled “Mosque of Omar” – supposedly because of “a tradition that it was built by Caliph Umar I,” even though in reality it was not built by Omar and it is not a mosque.
This confusion – which is apparently shared by Muslims – is all the more interesting given the fact that there is actually a Mosque of Omar in Jerusalem, which is located opposite the Church of the Holy Sepulchre, i.e. in the Christian Quarter; this is presumably the one mentioned in the misleading MEQ insertion. According to Muslim tradition, this small mosque marks the place “where the Caliph Umar […] performed salah [i.e. prayer] after the conquest of Jerusalem by the Muslims in 638 CE.” The story Muslims associate with this mosque is that the Patriarch of Jerusalem was showing the victorious Muslim leader the Church of the Holy Sepulchre, and when the time for Muslim prayer came, he offered Omar a place to pray in the church. However, Omar declined, “explaining to the Patriarch, ‘Had I prayed inside the church, the Muslims coming after me would take possession of it, saying that I had prayed in it.’”He therefore went outside, and – likely replacing an earlier mosque at a different location – the current Mosque of Omar was built in 1193 to commemorate this event.
The story associated with the Mosque of Omar is arguably very interesting: it shows the victorious caliph as a tolerant man who had no illusions about the intolerance of the “Muslims coming after [him].”
It is interesting to note that this story, as well as the confusion about the Mosque of Omar, is reflected in an article that appeared in the English-language magazine of a United Arab Emirates company some ten years ago. The July-August 2006 issue of the magazine includes a piece on Omar that is illustrated with an image of the Dome of the Rock and presents all sorts of legends and myths as a historic account put together by the company’s “Information & Research Department.” 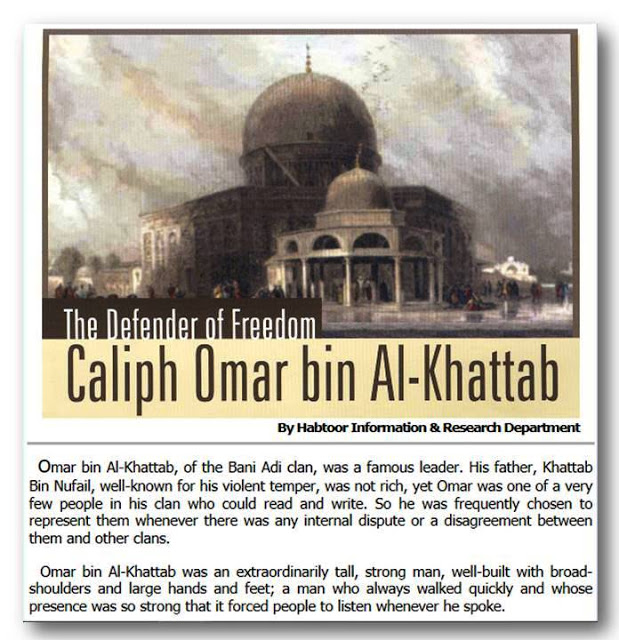 Here is the relevant part of the story:
“Another incident occurred when Palestine was conquered. Omar came in person to Jerusalem, where he signed the famous Peace Treaty. It ran as follows:
‘From the servant of Allah and the Commander of the Faithful, Omar: The inhabitants of Jerusalem are granted security of life and property. Their churches and crosses shall be secure. This treaty applies to all people of the city. Their places of worship shall remain intact. These shall neither be taken over nor pulled down. People shall be quite free to follow their religion. They shall not be put to any trouble…’
The gates of the city were now opened. Omar went straight to the place of the Dome of the Rock, where he said his prayers. Next he visited the Church of the Holy Sepulchre in the city. He was in the church when the time for the afternoon prayer came.
‘You may say your prayers in the church,’ said the Bishop.
‘No,’ replied Omar, ‘if I do so, the Muslims may one day make this an excuse for taking over the church from you to build a mosque in its place.’
So he said his prayers on the steps of the church. Even then, he gave the Bishop a written undertaking stating that the steps were never to be used for congregational prayers nor was the Adhan (call to prayer) to be said there.
Omar wanted to build a mosque in Jerusalem. He asked the Bishop which place would be suitable for the purpose. The Bishop suggested the ‘Sakhra,’ or the rock on which Allah had talked to the Prophet Jacob. Here the Christians had heaped garbage to bait the Jews.
Immediately the Sakhra was cleared of garbage. Omar himself worked like a labourer with the rest of his men. Jerusalem, the city of David and of Christ, witnessed the equality of Islam. When the Sakhra had been cleared of every trace of dirt, a mosque was built on the site. The mosque stands to this day and is known as Omar’s Mosque.”
So you see: the Christians were really terrible – they “had heaped garbage” on the rock “to bait the Jews;” but the Muslims were simply wonderful and demonstrated their amazing tolerance by building a “mosque” over the Jews’ most holy site…