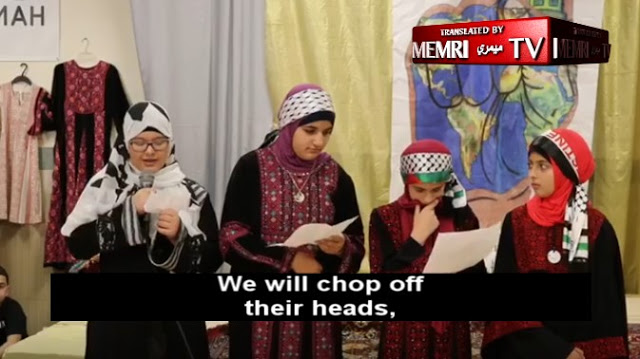 MEMRI and the Investigative Project on Terrorism reported on Friday about an obscene presentation at the Muslim American Society in Philadelphia where kids wearing Palestinian scarves sang: “Glorious steeds call us and lead us [to] the Al-Aqsa Mosque. The blood of martyrs protects us… Flow, oh rivers of martyrs!” A young girl read a poem: “We will defend [Palestine] with our bodies… We will chop off their heads, and we will liberate the sorrowful and exalted Al-Aqsa Mosque… We will subject them to eternal torture.”

Local Philadelphia media, and Fox News, picked up on the story. The Muslim American Society responded with two “clarifications” – both of which are not plausible in the least.

The first one, from MAS Philly:

The Muslim American Society – Philadelphia Center rejects a statement made at an event held in April at a local community center in Philadelphia. The center celebrated “Ummah Day” where children sang songs from their cultural traditions. While we celebrate the coming together of different cultures and languages, not all songs were properly vetted. This was an unintended mistake and an oversight in which the center and the students are remorseful. MAS-Philadelphia Center will conduct an internal investigation to ensure this does not occur again.

First of all, it wasn’t only songs – it was songs and poems. Multiple adults were there, applauding, not to mention the ones who taught the kids, trained them to do their hand motions in sync with the songs, and so on. This was no oversight, and the only remorse is that they were caught.

Secondly, if you take this statement at face value, that means that some Muslim “cultural traditions” include calls to behead Jews in Israel.

Now, a new statement has been released that contradicts the earlier one, from MAS headquarters in DC:

Our investigation revealed that the school that organized the event on April 17, 2019 is a separate entity renting space from MAS Philadelphia. The school board has informed us that it has taken immediate actions and dismissed the person in charge of the program.  In addition, they will form a local commission to aid in sensitivity training and proper supervision for future programs.

Unfortunately, the video from the school was uploaded to the chapter’s Facebook page without verifying the content of the video for appropriateness and making sure it conforms to our hate-free policy and values. The chapter will take further steps in assuring strict adherence to publishing and posting policies.

This is not plausible in the least. MAS Philly wouldn’t upload dozens of photos and videos for an event from a school only renting the space. 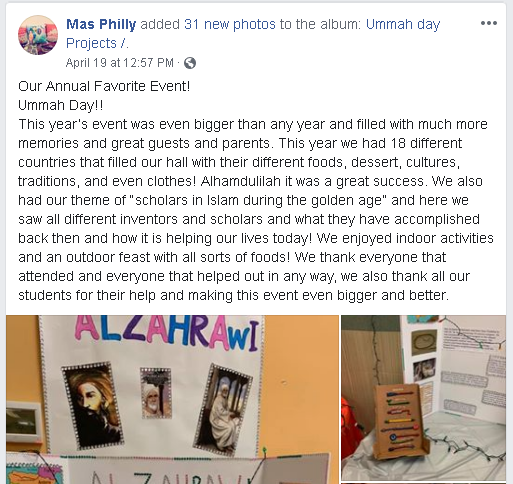 The backdrop at the front of the auditorium is the same as the one in the MEMRI video, so it wasn’t two separate Ummah Day celebrations.

Not only that, but the photos from the post listed here includes a bunch of displays of famous Muslim historic figures, including this one: 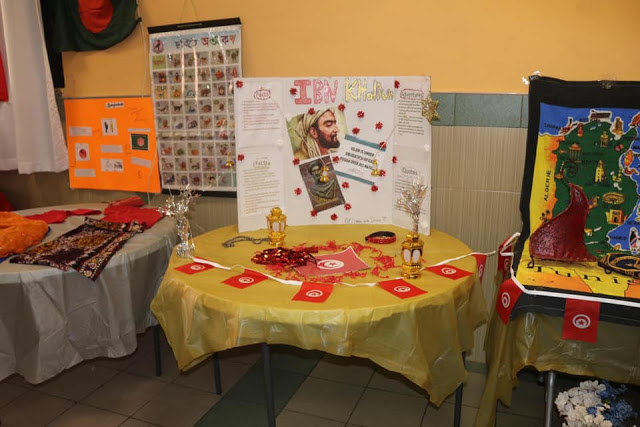 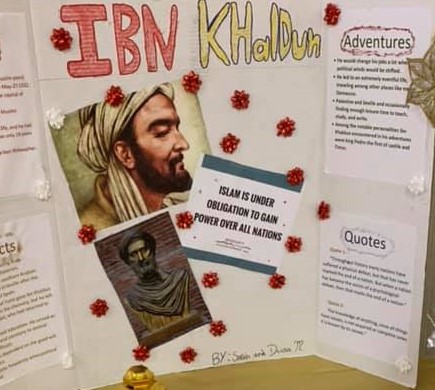 “Islam is under obligation to gain power over all nations.”

I am afraid that the few journalists that reported on this story will not bother to push back on the obvious falsehoods that were given in “explanation.” They wanted some sort of excuse that they can print and end the story there, to avoid being accused of Islamophobia. Who will be brave enough to point out that the “apology” was a bunch of lies in an attempt to end the story?

But the children who repeat the words of Ibn Khaldun, that Islam is obligated to subjugate every non Muslim nation, know the truth of what they are taught.